“Someone gimme a hand with this palm!”

“If I could only take such possessed topiaries home with me!”

“COME NOT 'TWEEN A TREE AND HIS WRATH!”

“Don't take this personal but I'm going to leave.”

Palm Treeguards are hostile Boss Monsters in the Shipwrecked DLC. They are the Palm Tree equivalent of Treeguards, and, like Treeguards, may spawn as a result of cutting down a nearby Palm Tree. Assuming enough palm trees are nearby, a minimum of three Palm Treeguards always appear when the spawn condition is met. With growing day count, the maximum number of Treeguards spawned rises - to four from day 30, to five on day 80.

When killed, they drop two Coconuts and, like Treeguards, Monster Meat and six Living Logs.

Once spawned, Palm Treeguards are instantly hostile, and attack the player with both ranged and melee attacks. The ranged attacks are Coconuts thrown at and around the player, roughly five at a time (Coconuts are occasionally dropped, but only at a 1% rate according to the code). To avoid getting hit, the player should notice the small patches of shadow that indicate where the coconuts will land, and avoid these areas. Their melee attack is very similar to a regular Treeguard's, and can be avoided by keeping a distance away from them.

They walk at a pace similar to that of a Treeguard, being much slower than the player. However they will follow the player indefinitely, or at least until the player is no longer accessible. If the player returns to the island, they will still be active and hostile.

Planting Jungle Tree Seeds or Coconuts will appease Palm Treeguards, much like the normal Treeguards, who can be appeased by planting Pine Cones close to them. Planting one within 16 units away has a 15% chance to pacify them, while within 5 units away has a 33% chance. Palm Treeguards give a soft growl every time a seed or Coconut is planted, whether or not it pacifies, even if they are sleeping. If an angered Palm Treeguard following the player does not growl when a seed is planted, it was not planted close enough to calm the Palm Treeguard. Planting seeds ahead of time does not prevent Palm Treeguards from spawning, nor does it calm them later. Attempting to chop down a tree in the presence of a pacified Palm Treeguard will enrage it and cause it to attack, though it can be pacified again with more seeds. It is even possible to pacify one after attacking it. Palm Treeguards may also be distracted by putting them in fights not involving the player, and even weak enemies such as Spiders or Snakes will do.

Below is the number of hits it takes with each weapon to kill a Palm Treeguard when playing with characters with a default damage modifier. The Weather Pain is not included due to the random nature of its projectile.

Placing a Campfire and leading them through it is an effective way to kill Palm Treeguards. When on fire, they stand in place and panic, catching fire repeatedly till they die. Another way to use this strategy is to instead lead them to a krissure, which will have the same effect as a campfire. The only disadvantage is that krissures eventually die out, so this strategy is only effective if there are multiple krissures in a small area. Players do not run the risk of them walking around and setting things on fire as one would with a regular Treeguard. However, this does destroy the Living Logs they would normally drop.

Another way to fight them is to run in and get about 5-7 hits in as soon as they pull a coconut from their torso, rinse and repeat. Their swipe melee attack seems to be much slower than that of normal Treeguards. This technique can be done even when fighting 3-4 at a time as each of them tends to throw their coconuts at the same time.

They are unable to walk through puddles and this can be used to the player's advantage by walking into one and dashing back and forth to hit them while they throw their coconuts. 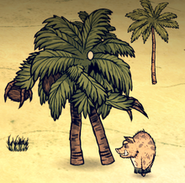 A Palm Treeguard attacking a Wildbore.

A Palm Treeguard as seen in the Shipwrecked Early Access trailer.