Stores items
Eats any Fish food placed inside him

Packim Baggims is a following companion in the Shipwrecked DLC. He functions similarly to Chester and has almost identical stats as him. He will eat any fish food placed inside him, so caution is advised. He is summoned with the Fishbone, which may be found in any land Biome on any island, except the starting island.

Packim Baggimg can eat most basic fish food items, has max hunger of 150. He loses 0.1

day. This is affected by Poison, and like player characters he will lose 20% less, total of 38.4

/day, if he is poisoned. He will not lose health while starving. He will eat the following items if put inside him:

If he eats Dogfish or Swordfish he will spit out Spoiled Fish.

He cannot be frozen with the Ice Staff and takes 3 Sleep Darts to be put to sleep. 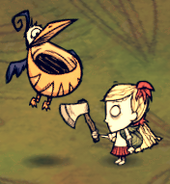 Packim Baggims transforming into his fire form.
Add a photo to this gallery
Retrieved from "https://dontstarve.fandom.com/wiki/Packim_Baggims?oldid=293100"
Community content is available under CC-BY-SA unless otherwise noted.