Opening an Ornate Chest triggers a random effect such as spawning Dangling Depth Dwellers/Terrorbeaks, raising or lowering Health/Hunger/Sanity, or affecting the durability of inventory items. The character will often state, "It's a trap!".

Items drop from Large Ornate Chest with durability will have full durability. 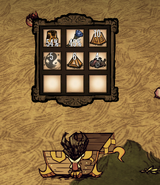 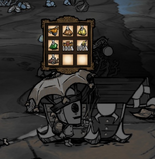 An example of the contents in a large ornate chest in Don't Starve Together.
Add a photo to this gallery