"The cartographer's most valuable weapon."

Marks a spot on the Map.
Reveals the Fog of War in the area around it.

“Wolfgang thinks is full of secrets.”

“This is a conduit for strong revelatory magicks.”

“May the secrets öf this land be divulged by the göds.”

“It's watching over us.”

“Someone's got their eye on me.”

“Hyuyu! What a mischievous way to spy!”

“Map making is so much more interesting here!”

“Good, this will help me get the lay of the land quicker.”

An Ocuvigil is a Don't Starve Together exclusive Structure, introduced in A New Reign. It is found in the Magic Tab, requires a Purple Moonlens, a Compass and 2 Boards to craft, and a Prestihatitator to prototype. It serves as a Map marker and is also used for revealing the Fog of War in a certain location to all players. Contrary to popular belief, it does not keep the area around it loaded. 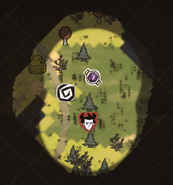 The Ocuvigil as seen on the Map.

The old Ocuvigil as seen on the Map.

Ocuvigil as seen in the poster for the East or West, Base is Best update.
Tiếng Việt
Community content is available under CC-BY-SA unless otherwise noted.
Advertisement