"How about a lil fire with your spear?"

“This will leave a mark.”

“This is one fiery spear.”

“I've made sure it packs a fiery wallop.”

“One jab makes'em burn up!”

“Pull the trigger and voila! Dinner is done!”

“For all my night spearing needs.”

The Obsidian Spear is a craftable Weapon exclusive to the Shipwrecked DLC. It requires 1 Spear, 3 Obsidian, and 1 Dragoon Heart to craft. It can also be found as a reward from X Marks the Spot treasure chests. Like all items in the Volcanic Tab, it cannot be prototyped and the player must always be wearing a Brain of Thought or must be near an Obsidian Workbench to craft it again.

Initially, the Obsidian Spear deals the same damage as a Tentacle Spike per hit, but as the Obsidian Spear is used to attack, it will become charged causing it to deal up to 2x damage when fully charged. It takes approximately 30 hits to reach full charge. As the charge level increases, the Obsidian Spear will also produce more heat and light, which protects the players from Charlie, but can rapidly cause Overheating when unequipped. If dropped into water while sailing, the Obisidian Spear will lose all of its charge. It should be noted that it has a very high durability, 2.5x that of the regular Spear.

Players should take caution when using an Obsidian Spear with high levels of charge, as the targeted Mob is likely to be killed and burn, causing Meat to be cooked and the loots to ignite. Like other Obsidian tools, the Obsidian Spear will not gain any charges during Hurricane Season. 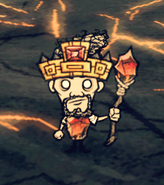