“It keeps the master in the chair.”

“Interesting. Previous ones weren't so inundated with darkness.”

“Gives me the heebie jeebies.”

“Me don't think thet be unlockin' any treasure...”

“Seems like the kind of thing I would want to unlock.”

The Nightmare Lock is a unique Adventure Mode structure used to trap the person sitting on the Nightmare Throne. It looks like a tiny version of the Wooden Thing with spikes surrounding it, and can only be found at the epilogue of the Adventure Mode beside Maxwell. Also, a Divining Rod is required to unlock the lock. After unlocking, Maxwell (or whatever character was put there last) will be released, and the player's character will take his place on the Nightmare Throne. Back in Sandbox Mode, the player will become Maxwell (or whatever character was last on the throne) but will keep the items they had when they activated Maxwell's Door. 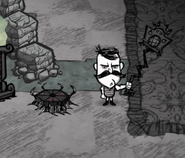 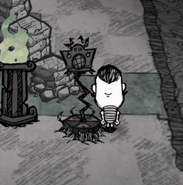 The Nightmare Lock unlocked by a Divining Rod.
Tiếng Việt
Community content is available under CC-BY-SA unless otherwise noted.
Advertisement