"A throwable pouch full of sleep."

“It makes snooze circles when I throw it.”

“Is bedtime for flinging.”

“It's past your bedtime.”

“Some folks around here could use the shuteye.”

“It appears to be a sleeping bag.”

“An unethical weapon, plain and simple.”

“I'll throw it, then you'll catch some ZZZs!”

The Napsack is a Fight Tab Item exclusive to Don't Starve Together, introduced in A New Reign. To prototype it, players need its Rare Blueprint dropped by the Misery Toadstool. Four Napsacks can be crafted using a Shroom Skin and a Poisoned Canary.

Napsacks can be thrown, similar to Water Balloons, to create a Sleep Cloud causing all nearby Mobs to go to sleep for a maximum of 20 seconds. 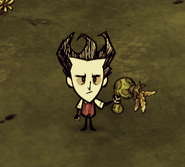 Wilson tossing a Napsack, causing the targets to fall asleep.
Retrieved from "https://dontstarve.fandom.com/wiki/Napsack?oldid=442596"
Community content is available under CC-BY-SA unless otherwise noted.