Don't Starve Wiki
Register
Don't have an account?
Sign In
Advertisement
in: Mobs, Return of Them, Monsters,
and 3 more

Cave Lights from above in the Lunar Grotto Biome.

“Haha gross! I just saw it eat something through its nose!”

“Nature has played a cruel joke on this creature.”

“I suspect the impressive snout must compensate for its poor eyesight.”

“Just keep your nose out of my business, eh?”

“Don't look! It's not wearing any clothes!”

“I've never seen a creature that inhales its food so... literally.”

“Hyuyu, what a nosy creature!”

“They must have terrible allergies.”

“Hmph, and people call me batty!”

The Naked Mole Bat is a mob exclusive to Don't Starve Together. They spawn when a player approaches one of the large lights shining from above into the Lunar Grotto biome. They are aggressive towards the player. When killed, they will respawn from the same light after 4 days.

They attack all other small creatures. The only monsters they don't attack naturally are Batilisks and other Naked Mole Bats. When attacking, they bite their target with their sharp teeth. Before attacking, they sometimes screech.

When finding food, they move towards the food item and eat it with their nose by sniffing it. They are omnivore and eat both meats and vegetables/fruits.

After some time they will go to sleep and create a Naked Mole Bat Burrow. 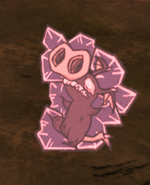