“Aaah! You are definitely not an electron!”

“Its feathers are frazzled.”

“Mmmm. Is still breakfast, I think.”

“A new life. The last thing anyone needs.”

“I suppose that's approximately what I expected.”

“Don't you just want to pick it up and squeeze it?”

“Looking for your momma? Apologies, but I hope you do not find her.”

“You could be a great flyer if you just applied yourself.”

“The whirlwind of youth.”

The Mosling is a small baby bird in the Reign of Giants DLC, spawned from an Egg on a nest made by a Moose/Goose during Spring. Nearby Moslings will form a herd centered around a single nest. They will roam around eating various Food they can find, including foods from Crock Pots and drying racks. When Spring ends, the Moslings will take flight and ascend into the sky. If killed, a Mosling will increase the player's Naughtiness level by 6.

Under normal circumstances they try to avoid conflict, and will run from an aggressor. If attacked while their parent is alive, all members of the herd will run toward the nest and call for help, causing a Moose/Goose to land and protect them. If their Moose/Goose guardian is slain, the Moslings will become enraged and attack the player. Moslings attack by spinning so fast that they appear as a whirlwind which radiates electricity, travelling in a straight line. For each Mosling, for each block of 2.5 second of whirlwind attack animation, there is 10% chance for them to be struck by Lightning (which does not damage them) and rain to start falling for a short period. The mosling whirlwind attack has 10% chance of stopping after each block of 2.5 second, or when the mosling is 10 unit away from the player. After each attack they will become dizzy for a short period of time, making them vulnerable to counterattacks.

Moslings can be very helpful when playing as WX-78. Their spinning attack calls lightning strikes on the player which means they will be overloaded many times, healing them and offering a significant speed boost. This can potentially be disadvantageous, however, due to the large amount of Sanity loss when hit by lightning.

Below is the number of hits it takes with each weapon to kill Moslings when playing with characters with a default damage modifier. The Weather Pain is not included due to the random nature of its projectile. 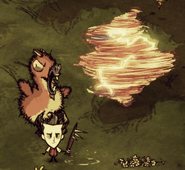 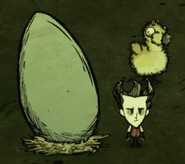 The egg from which Moslings hatch, with Wilson for scale. 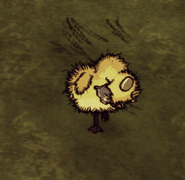 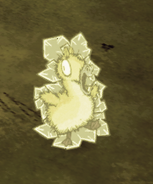