"Morning light for a nighttime fight."

“Danger in the dark.”

“I wonder if it's named for Venus?”

“Curious. It smells faintly of ozone.”

“Shed some light on any fight.”

“Whose bright idea was this? Get it? Because it's bright? Never mind.”

“A light up weapon? What will they think of next!”

The Morning Star is a melee weapon from the Reign of Giants DLC. It requires 1 Volt Goat Horn, 2 Electrical Doodads, and 2 Nitre to craft and an Alchemy Engine to prototype. Unlike most other weapons, the Morning Star doesn't lose durability when it strikes. Instead, it loses durability constantly while held. It also emits light while equipped. The Morning Star can do either 43.35 or 72.25 damage. 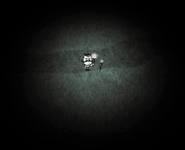