Honks to make the player drop their weapon.

“I don't exactly know what that thing is.”

“I dub it Alces canadensis.”

“Whatever it is, it's definitely Canadian.”

“It's definitely from the North, whatever it is.”

“There are a fascinating number of chimeras in this world.”

“She doesn't look at all pleased to see us.”

“I wish you were a bit less moose-y and a lot more goose-y!”

“Tell me, can you fly with those wings?”

“What manner of beast are you?”

“This "Mother Goose" that Wicker-lady told about?”

“Woah! Now THAT should be Canada's national animal!”

The Moose, also known as Goose, is one of the four giants in Reign of Giants. Moose/Goose can appear 2–4 days into Spring if more than three base structures have been built relatively close to each other (Science Machine, Lightning Rod, Crock Pot, etc.). The giant will disappear when Summer arrives.

The Moose/Goose takes 4 blasts from the Ice Staff to be frozen and takes 1 Sleep Dart to be put to sleep. When killed, the Moose/Goose will drop 6 Meat, 2 Drumsticks, and 3 to 5 Down Feathers.

If left alone for roughly 1 day after it arrives, a Moose/Goose Egg will spawn, which will hatch into 5 Moslings if hit with a hammer 4 times. Moslings won't grow into a Moose/Goose but when attacked, they will let out a cry, spawning another Moose/Goose. Note that a Frog Rain could potentially spawn another Moose/Goose if the Frogs attack the Moslings. When a Mosling is slain, all Moslings will become enraged and use a whirlwind attack that attracts Lightning to them, attempting to strike the player.

Moose/Goose will make a warning animation once it spots the player, becoming aggressive towards them. She will proceed to slowly hop towards the player. When in range, she will attempt to gore the player. After every third swipe, she will honk which is a disarming attack, knocking the player's weapon out of their hands. The attack can be avoided by unequipping the held item and re-equipping it. Due to her slow movement, and slightly slow attack, she can be fought the same way as Deerclops, using a 3-hit kite method. Another option is to tank all the damage with a Football Helmet and Log Suit, eliminating the need to kite.

One of the easiest ways to deal with any boss in Don't Starve is a Sleep Dart/Pan Flute and Old Bell/14 Gunpowder combination. Not only does the 14 Gunpowder bring the Moose/Goose down to 200 health, but it can be easily taken down from there with 2 Blow Darts and still get its loot. The Old Bell, on the other hand, can be used thrice to finish it off while still obtaining its loot.

Alternatively, since Moose/Goose lacks an area-of-effect attack, it can be lured into a herd of Beefalo, as Beefalo are always in heat during spring. Since it can only strike one at a time, losses to a large herd will be minimal. The player can also use friendly pig men, but they will eat the meat after the giant is killed. The Moose can also be lured into an area with multiple Ponds so the Frogs will attack her at day time. However, at dusk, the Frogs will go back to their Ponds until next day, making this strategy not viable during dusk and night.

Another strategy is to build a large circle with a gap for an entrance of trees and lure Moose/Goose inside the trees. She will be trapped inside, allowing the player to kite her easier.

Below is the number of hits it takes (with a default damage modifier) to kill Moose/Goose. The Weather Pain is not included due to the random nature of its projectile.

In Don't Starve Together, there will be several Moose/Goose nesting sites created at world generation (up to nine, but some may fail to be placed). Each Spring (except on Spring or Winter starts, unless the player restarts the game after day 27 in Spring), 50% (or 0%, 25%, 75%, 100% of them for other world configuration options, respectively) of these will be occupied after 0.5-1.5 days, rounding up. Eggs will be laid 0.25-0.5 days after arrival, and hatch 2 days after being laid. 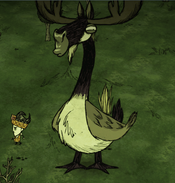 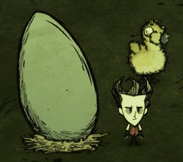 A Moose/Goose Egg, with Wilson for scale.

Moose/Goose mid call, which it does before attacking. 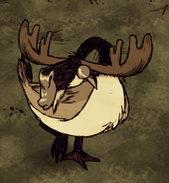 Moose/Goose among the trees in the Spring poster.

Moose/Goose finding something to attack

Moose/Goose flying away after the end of Spring.

Moose/Goose in the Don't Starve Together loading screen. (left) 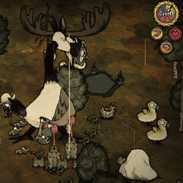 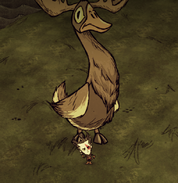 Moose/Goose as seen in a poster announcing the release of Reign of Giants on the PS4.

Moose/Goose as seen in a poster announcing the arrival of Reign of Giants content in Don't Starve Together.

Moose/Goose as seen in stream smash