Don't Starve Wiki
Register
Don't have an account?
Sign In
Advertisement
in: Mobs, Hostile Creatures, Return of Them, Innocents
English

“To let it live would be a cruelty.”

“WHAT IS WRONG WITH IT”

“Something about this place has made the creature go quite wrong.”

“What an atrocious beast.”

“It's even more monstrous than us!”

“Yeeshkabob! What happened to your... everything?”

“Hyuyu! What a horrible face you have!”

“Glorp, can see its insides!”

“It's a penguin, risen from the grave!”

“Is that creature actually alive?!”

The Moonrock Pengull is a hostile Pengull variant exclusive to Don't Starve Together and introduced in Return of Them. It is found on the Lunar Island during Winter when a player walks near the Ocean.

Being especially grotesque, these moon mutated Pengulls will drain sanity when near and attack other mobs similarly to Hounds. This excludes other Pengulls or Moonrock Pengulls.

Just like normal Pengulls, they have a hunger bar that lasts for 12 days. They will take damage from starvation and will eventually die. The Moonrock Pengull drops Ice and Monster Meat upon being killed.

A Moonrock Pengull as seen in the Turn of Tides trailer. 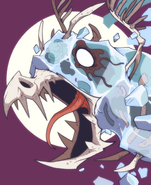 A Moonrock Pengull as seen in a drawing from Art Stream # 81.