“I only worship science.”

“They always need an offering.”

“I shall make an öffering!”

“Do I gotta offer it up to something?”

“Usually these kind of things are locked in an ancient temple guarded by a monster.”

The Moon Rock Idol is a craftable Item exclusive to Don't Starve Together. It is found in the Celestial Tab, and requires a Moon Rock and a Purple Gem to be crafted.

Moon Rock Idols can be offered to the Celestial Portal allowing the players to despawn and rejoin the same game with a different playable Character of their choosing. Doing so will cause the player to drop their entire Inventory, however, they will keep their Day count and Map exploration progress, along with any prototyped Crafting recipes and any adopted Critters. The Moon Rock Idol will be consumed in the process. 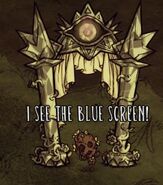 WX-78 offering a Moon Rock Idol to the Celestial Portal. 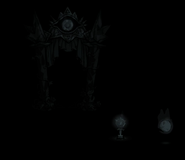 A Moon Rock Idol glowing in the dark.