“That rock came from the moon.”

“Just another rock to me.”

“But is not cheese?”

“Implications of a lunar body? Interesting.”

“A little piece of sky to hold in my hand.”

“Woah! What an odd texture.”

“It was hewn from solid moon.”

“It came from outer space!”

“I never would have predicted I'd see a piece of the moon up close.”

Moon Rocks are Items exclusive to Don't Starve Together. They are obtained by mining crash-landed Meteors, which have the appearance of sharp rocks striped with jagged blue cracks, or Suspicious Moonrock sculptures. Mining a Meteor Boulder will yield a Rock, a Flint, and 2 Moon Rocks. There is a 60% chance and a 30% chance for a third and fourth Moon Rock, respectively.

Moon Rocks can be crafted into Moonrock Walls, Cratered Moonrocks, Moon Dials, Moon Rock Idols and Moon Crater Turf. They are also required to repair the Moon Stone, and to complete construction on upgrading the Florid Postern to the Celestial Portal.

Several Moon Rocks next to a Meteor Boulder. 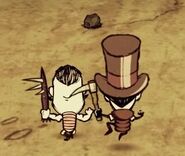 An early texture for the Moon Rock as shown in the "...In With The New" update trailer.
Français
Community content is available under CC-BY-SA unless otherwise noted.
Advertisement