"Track the phases of the moon!"

“Water amplifies the science, allowing us to measure the moon.”

“What the heck? I can still see the moon!”

“Wolfgang see moon reflection, but not his mighty self!”

“Does it reflect from the other side too, Abigail?”

“THE MOON IS INORGANIC AND GOOD”

“Something very odd is going on here.”

“Do I really need to be reminded of the moon during the day?”

“The gem conjures water springs in conjunction with the "moon's" cycles.”

“Mani's visage remains, even in the light öf day.”

“Hey, Ms. Wicker! How come we can still see the moon?”

“I hope the birds get to enjoy it, too.”

“Must be broke. I can still see the moon.”

“What a handsome devil I see in the water!”

The Moon Dial is a new craftable structure exclusive to Don't Starve Together, introduced in A New Reign, found in the Magic Tab. It can be used to see the Moon Cycle, which are reflected in the water inside the structure. The closer the world is to a full moon, the higher the water level will be, with the Moon Dial overflowing during a full moon. It also provides light depending on the current moon phase, with the new moon causing the Moon Dial to emit no light, and the full moon causing it to emit the most light. During nighttime, the player may inspect the dial for a different quote, depending on where the moon is in the cycle. A Moon Dial built in the Caves will not work, and character examination quotes will be different.

From New Moon to Full Moon

From Full Moon to New Moon

Moon Dial as seen in the poster for the Arts and Crafts update. 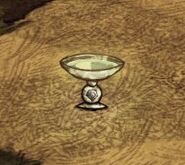 The Moon Dial as seen in the game. Note that the half moon is reflected on the Moon Dial. 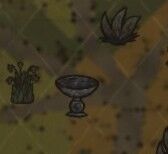 The Moon Dial as seen on the map.

The Moon Dial on a new moon.

The Moon Dial on a waxing crescent.

The Moon Dial on a waxing half moon.

The Moon Dial on a waxing gibbous.

The Moon Dial on a full moon.
Retrieved from "https://dontstarve.fandom.com/wiki/Moon_Dial?oldid=485553"
Community content is available under CC-BY-SA unless otherwise noted.