“Ready for a little nighttime exploring?”

“It lets me see on every plane!”

“Has nice stench to it, florp.”

“These work way better than the X-ray goggles I mailed in for back home!”

“What a funny looking hat. Let me try it on!”

Moggles are Headwear from the Reign of Giants DLC. They are found in the Light Tab, require 2 Moleworms, 2 Electrical Doodads, and 1 Glow Berry to craft and an Alchemy Engine to prototype.

In the Shipwrecked DLC, Moggles cannot be crafted but can be brought over from a connected Reign of Giants world. In Shipwrecked, they can be refueled with Dragoon Hearts, restoring 33.25% of their durability similar to Glow Berries.

In the Hamlet DLC, Moggles cannot be crafted. Instead, they can be bought for 20 Oincs at The Sow's Ear Hat Shop at the Pig City. 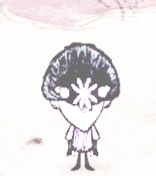 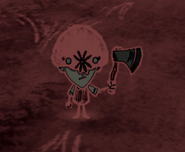 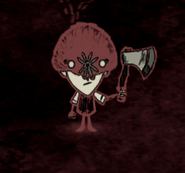 Wolfgang being seen in black and white while wearing the Moggles under a shaft of light in a Cave.