Besides the playable and non-playable characters, various minor characters appear or are mentioned throughout the supplemental material of the Don't Starve franchise.

Angeline and other family[]

Maman Angeline is Warly's mother. She first appeared in the animated short Taste of Home.

Warly's Compendium entry explains that as she got older, Angeline started losing her memory. Because of this, Warly abandoned a career as a sous chef in Paris to take care of her.

It is implied in a promotional image for Taste of Home that she taught a young Warly how to fish.

Warly also mentions his Nana in two quotes. The first is for Seafood Gumbo in Shipwrecked and Don't Starve Together: "Incredible! Just like Nana used to make!" The other is for Shark Fin Soup in Shipwrecked: "I used Nana's secret recipe."

Other members of Warly's family are pictured in the promotional image for Taste of Home, including who is likely Warly's father as well as several silhouetted figures.

Silhouettes of Warly's family members as seen in a promo image for Taste of Home.

More family photos from the Taste of Home promo. 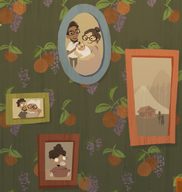 Family photos from the Taste of Home promo, including a photo of most likely an infant Warly held by Angeline and a man who may be Warly's father. 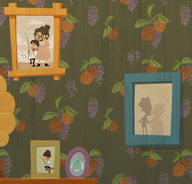 Family photos from the Taste of Home promo, including a photo of Angeline teaching young Warly how to fish.

Concept art of Taste of Home from Rhymes With Play #250.

Concept art for Taste of Home from Rhymes With Play #250.

Color concept art of Maman for Taste of Home from Rhymes With Play #250.

Color concept art of Maman for Taste of Home from Rhymes With Play #250.

Animation test for Taste of Home from Rhymes With Play #250.

Animation test for Taste of Home from Rhymes With Play #250.

"Another of your kind"[]

During the Gorge event, Mumsy has a chance to say, "Another of your kind passed through here once."

Charlie and Winona's parents were shown in a photograph in the animated short Next of Kin.

When nearsighted, Wagstaff has a chance to say "Theoretically, it could be my Aunt Velma." This is also a reference to the Scooby-Doo franchise's running gag involving Velma Dinkley losing her glasses and looking for them frantically while complaining of not being able to see without them.

Curio Collector's family and others[]

The Curio Collector's boss is mentioned in a quote that may appear when idling at the Trade Inn interface: "I've always been a loner, me. Tha boss mostly lets me alone, which suits me fine."

Two more idle quotes involve his nox, one referring to his past mule, Shadow:

The nox is also referenced in the names of two helmets in The Forge event: Nox Helm and the Resplendent Nox Helm. The word "nox" is Latin for night.

The Curio Collector's father is mentioned in one of his quotes during the A feastin' pair of birds minigame added during the Don't Starve Together Winter's Feast 2019 event: "My ol' pops taught me this game. Try to remember and match pairs."

The Curio Collector's "mouths to feed" were first mentioned in one of his game over quotes for the Ravin' Wrapper Raiders minigame added during the Don't Starve Together Hallowed Nights 2019 event: "Thanks for helpin', but I can't give you a better trade. I've got mouths to feed, ya'know."

They were mentioned again in a quote for when the Curio Collector gives the player another guess for the A feastin' pair of birds minigame: "I've got mouths to feed. Tha birds will have to find their own feast."

Gatekeeper is a title given to the survivors by Battlemaster Pugna during The Forge event. Pugna associates the Gatekeepers with serving "The Throne," referring them also as the Throne's lapdogs.

Pugna quotes introduced in the 2017 version of The Forge:

Pugna quotes introduced in the 2018 version of The Forge:

In The Gorge event, Mumsy mentions the title only once when a player is nearby during an active round. She has a chance to ask "Are you... Gatekeepers, by chance?"

Genny (short for Genevieve) and her fellow Voxola workers first appeared in the animated short Next of Kin. Genny is saved by Winona when a piece of the ceiling was about to fall on her. The other workers can be seen fleeing the Voxola factory after the explosion from Wagstaff's portal caused a fire to break out.

Genny was was named by DST writer Kris during Rhymes with Play #228.

Genny in storyboard from Rhymes With Play # 229.

Drawed Winona's movements for her short film from Rhymes With Play # 229.

Drawed Winona's movements for her short film from Rhymes With Play # 229.

His first official appearance was in the animated short C'est La Vie, as shown by his monogram and business name on items in his apartment. The short reveals that Witherstone was about to be captured into the Constant by Maxwell, but by pure happenstance was knocked out of the portal by Wes. This allowed him to return home to his daughter who Wes was trying to help throughout the short by retrieving her doll for her.

As established by the animated short, Witherstone and his daughter lived at some point in an apartment in France. There is a passport with the word "America" on his table. He also owns a Phonograph and a photo of someone standing next to a Shadow Watcher.

Closeup of the Shadow Watcher photo in Witherstone's apartment in C'est La Vie.

Closeup of Witherstone's monogrammed case and a crate from his business as seen in C'est La Vie.

Harold J. Rutherford has only been named in the fourth William Carter puzzle. He was mentioned in the newspaper article for the train crash that William Carter was involved in and is described as a "local businessman and railway investor".

Jack Carter and other family[]

A postcard he sent to William is featured in the third William Carter Puzzle. It's shown through this postcard that before William moved to America, Jack immigrated there first and decided to move out West to California before the brothers had any chance to meet in New York City. In the fourth William Carter Puzzle there is a postcard addressed to Jack from William. It shows that at the time the postcard was written, Jack lived in Corona, CA.

Jack appeared for the first time in the animated short Wish You Were Here where it's revealed that he looks nearly identical to William, implying that they are also twins. After Wendy's refresh update, Maxwell was given his first quote mentioning his brother for the final stage of Abigail's Flower: "...I wonder how my brother is doing."

Jack and William Carter's mother was first mentioned in the third William Carter Puzzle. In Jack's postcard to William he says "Have you corresponded with mother lately? The post is dreadfully inconsistent out here, I can't believe she hasn't met the twins yet!"

Abigail and Wendy's mother, and most likely Jack Carter's wife, is mentioned only in Wendy's examination quotes.

Wendy associates her mother with the color yellow in two quotes. The first is for the Yellow Gem, "It reminds me of my mother." The second is for the Yellow Moonlens in Don't Starve Together, "What color were mother's eyes?".

The 2019 Winter's Feast event added two more Wendy quotes about her mother and cooking. The first is for eating Holiday Cheer, "Abigail, it's like I can taste mother's cooking..." And the second is for the Sweet Potato Casserole, "Oh Abigail, remember how mother would make this every year?"

Professor Mourire is a spirit medium whose advertisement is seen in an image of Wendy's nightstand that was originally posted with her character update in Don't Starve Together and was later made into a Vignette. Wendy became interested in spiritualists like Professor Mourire and others after the death of Abigail.

The name Mourire may come from the Old French word "mourir" which means "to be dying."

Shadow Wilson is an entity that originally appeared on the main menu for Don't Starve. It would be seen on countdowns to the next update. It was made into a limited edition blind box figure.

Walani's quote for Dragoon Saliva mentions her brother: "My brother used to do the same thing."

Willow's caregivers first appeared in the animated short From the Ashes. It was later explained in Willow's Compendium entry that they took over caring for Willow after she was orphaned at a young age.

Last seconds of one of the caregivers as seen in From the Ashes.

The caregivers as seen in portraits on the wall of the children's home in From the Ashes.

Colored concept art of Willow and the caregivers for From the Ashes from Rhymes with Play #237.

Concept art of Willow and the caregivers for From the Ashes from Rhymes with Play #237.

Webber's family features prominently in his quotes. His father and mother appeared for the first time in the animated short Along Came A Spider. His grandfather appears in a photo in the same short.

Whiskers is implied to be the name of a cat that Webber's grandfather owned.

Wendy mentions a pet hamster she had in her quote for the Year of the Carrat item Speed Gym: "I had a hamster once. It died."

Wheeler mentions a grandmother in her quote for Plugged Sinkholes and Stone Slabs: "My Grandma taught me to always look under rocks." She also refers to her grandmother in an unimplemented quote for Blue Mushtree (webbed): "Mold and a lot of spiders. Reminds me of my Grandma's cellar."

Wortox mentions his mother in his quote for the Lavae Tooth: "My mom still has mine somewhere."

He also mentions imp friends in his quote for the Maxwell Statue: "My old imp friends would like this, I think."

Mumsy- "Reminds me of my old nanny."

Wilson mentions a grandmother in his quote for the Year of the Beefalo Victorian Blueprint item: "I think my grandmother wore something similar."