"Light up the night with your noggin."

“A hands-free way to brighten my day.”

“It's not real fire, but it's still pretty fun.”

“This would make a great reading light.”

“Down deep in a coal mine.”

“Eventually the firefly will starve.”

“The lens must focus the bioluminescence.”

“A lighted helm! För the darkness.”

“A handy light for our head.”

“Another job I hope to never do.”

“A light at sea keeps me calm.”

“Does it glow brighter if I think harder?”

“A head light to brighten my dreary thoughts.”

“Being able to see makes exploring a lot easier.”

“Quite an improvement on the classic handheld lantern.”

A Miner Hat is a Hat Item which provides Light while worn. It is found in the Light Tab and requires 1 Straw Hat, 1 Gold Nugget, and 1 Fireflies to craft, and an Alchemy Engine to prototype. It can also be found randomly at Skeleton Set Pieces.

The Miner Hat allows the player to keep their hands free, allowing weapons or tools to be used at night. It provides brighter and longer lasting light than a Torch (about 8 minutes / 1 day of light).

Pigs, Bunnymen, and Splumonkeys can also wear Miner Hats to light up their surroundings, and having the hat worn will prevent Pigs from panicking from the darkness.

In DLCs, the Miner Hat provides an additional 20% water resistance to the wearer in the Rain.

In the Shipwrecked DLC, Bioluminescence can also refuel the Miner Hat, restoring 38.5% of durability.

In the Hamlet DLC, Miner Hats can be bought for 20 Oincs at the Pigg and Pigglet's General Store.

The light radius of the Miner Hat.

A Miner Hat at 0% durability. 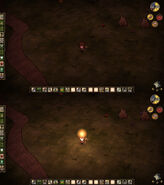 The world at dusk with and without the Miner Hat on.

An allied Pig following the light of Wolfgang's Miner Hat.