“Perhaps I could melt it into a more pleasing shape.”

“What a hideous creation!”

“REMINDS ME OF MY MOTHER”

“Neither fully organic nor inorganic!”

“The gears in here are so small they turn the fabric of reality.”

“An imperfectly constructed head of an automaton. I will put it to good use.”

“Strange armor be this.”

“"Thingys" like this always need more "thingys" to make it work.”

The Metal Potato Thing is one of four Things used on the Wooden Thing to travel to the next world. It spawns naturally in every world in its own Set Piece. It is located near some Basic Farms, which are surrounded by some Grass and Twigs, a Shovel, and unpicked Carrots.

There are two versions of it, one that spawns in Survival Mode and one in Adventure Mode. The only other difference is the color scheme. Player can craft a Divining Rod to help them track the Metal Potato Thing.

The only purpose of the Metal Potato Thing is to be used on the Wooden Thing. It's an important gameplay item and as such it cannot be destroyed or stolen by Mobs (e.g. Krampus, Splumonkeys etc.) 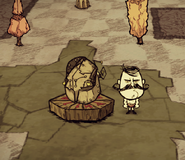