Message in a Bottle

Reveals a treasure's location on the Map.

“Someone wrote me a note!”

“The last, desperate act of a doomed soul. In a bottle.”

“Is someone trying to talk to me?”

“What is this primitive communication?”

“An enthralling missive from a mysterious being.”

“There must be a better way to send a message...”

“I wonder if it is a secret menu?”

“Adventure just seems to find me.”

A Message in a Bottle is a naturally spawning Item exclusive to the Shipwrecked DLC. It can be found lying on Beaches or floating in the Ocean, and appears as a regular bottle with a piece of paper inside. Once the message has been read, it will turn into an Empty Bottle.

Upon reading the message, the player's Map will automatically open and a red X will be placed on it, possibly in an area the player has already explored. If the player travels to the location, they will find two bones laid out in the formation of an X in a pile of dirt which can be dug up with a Shovel to uncover a Chest and two Bone Shards. This Chest usually contains valuables such as Dubloons and Gems, but may also occasionally cause Snakes to appear.

Each Message in a Bottle corresponds to a single treasure location determined during world generation, making them a finite resource.

Message in a Bottle

Reveal Crabby Hermit and Sunken Chest on the Map.

“Hey! It's a bottle of emergency kindling!”

“Has tiny note inside!”

“I wonder what poor forgotten soul sent that.”

“Not the most effective postal service.”

“Sure beats a paper airplane.”

“Someone sensibly bottled up their feelings and tossed them out to sea.”

“I do hope that's a recipe inside!”

“Wonder where this came from?”

“There's a note inside.”

A Message in a Bottle is also found in Don't Starve Together, introduced in Return of Them. They are found naturally in the Coastal Ocean, and can also appear every 1 to 2 days close to players in the Ocean.

The first message read by a player reveals the Crabby Hermit's location, unless the player already met the Crabby Hermit. Otherwise, reading a message has a 34% chance to generate and reveal a new Sunken Chest and a 66% chance to reveal nothing. If 4 or more markers are active at a time, the position of an already existing Sunken Chest is revealed instead.

After reading, the Message in a Bottle turns into an Empty Bottle.

If a Message in a Bottle does not reveal a position, it will contain a message instead:

Message in a Bottle found in the Ocean. 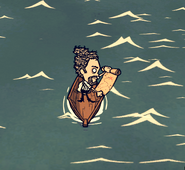 Warly reading a Message in a Bottle. 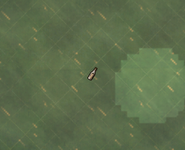 The Message in a Bottle as seen on the Map.
Retrieved from "https://dontstarve.fandom.com/wiki/Message_in_a_Bottle?oldid=485230"
Community content is available under CC-BY-SA unless otherwise noted.