“Who would live here?”

“No one would care if this burned down.”

“The house was not strong enough.”

“Time has broken it down.”

“They're not the handiest.”

“They copied the pigs, but they're even less intelligent.”

“What are they getting up to in there?”

“Is this dwelling made öf fish?”

“I could have sworn this was an outhouse.”

“Fisherfolk live here. I can smell it.”

“Nice house. Could do with some air freshener though.”

“I could disassemble that.”

“A stinky structure, to be sure.”

“Home is where the swamp is, flort.”

“I bet that wood is full of termites.”

“Time has taken its toll on this house.”

A Mermhouse is a naturally occurring Structure found in a Marsh biome. Its main purpose is spawning and housing Merms. It has an appearance similar to that of a Pig House, but in a dilapidated state. It cannot be crafted by the player, making it non-renewable. Mermhouses can hold up to four Merms and spawn a Merm every four days if any Merms are killed. Normally, only one Merm per Mermhouse is outside during the day. If that Merm gets into combat or if the house is struck with a Hammer, the rest of the Merms will come out and help it fight. Also, when Dusk comes, all Merms exit their house to wander around in the vicinity.

Deconstructing a Mermhouse with a Hammer yields 1-2 Rocks, 1 Board, and 1 Fish.

In the Shipwrecked DLC, Mermhouses are replaced by Merm Huts in Tidal Marshes. Merm Huts have a more tropical and better maintained appearance compared to Rundown Houses. When destroyed, instead of Fish, they drop Tropical Fish. Otherwise, their behavior is identical.

In Don't Starve Together, Mermhouses are called Leaky Shacks. 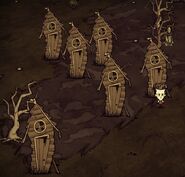 A cluster of Rundown Houses found in a Marsh biome.

A Set Piece with many Rundown Houses.

A burnt Rundown House from the Reign of Giants DLC.

A Merm Hut on the Map.

A Merm Hut on the Map before its appearance was updated.

A Rundown House as seen in The Gorge event in Don't Starve Together.
Community content is available under CC-BY-SA unless otherwise noted.
Advertisement