“They seem happy to have found a king.”

“Ugh, the SMELL coming from that thing!”

“Is tree full of fighting fish!”

“They seem to not wish us harm, for now.”

“THE PRESENCE OF A RULER HAS INCREASED THEIR EFFECTIVENESS”

“They seem to have found themselves a leader.”

“They're flying the royal banner.”

“Tis a fine fortress for a fish beast.”

“At least they seem friendly!”

“There's a terrible stench of fish...”

Merm Flort-ifications are a craftable Structure exclusive to Wurt in Don't Starve Together. They are found in the Structures Tab, require 5 Boards, 1 Tentacle Spots, and 2 Spears to craft, and an Alchemy Engine to prototype. They can also only be placed on Marsh Turf.

Merm Flort-ifications spawn a single Loyal Merm Guard if a King of the Merms is present in the world. When killed, Loyal Merm Guards respawn in 6 days during Winter and in 4 minutes the rest of the year.

“A royal guard with no Royal to guard.”

“I bet that would catch fire reeeal easy.”

“They fight without purpose...”

“A crude, but effective fortification.”

“A kingdom without a king.”

“They are lost without their chieftain.”

“Guards with no king, like puppets with no string.” 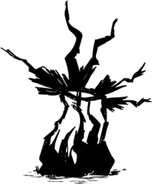 Retrieved from "https://dontstarve.fandom.com/wiki/Merm_Flort-ifications?oldid=468322"
Community content is available under CC-BY-SA unless otherwise noted.