Eats fruits and vegetables from the ground.
Defend their King

“I feel very guarded around these guys...”

“I can't tell which way it's looking.”

“Not as mighty as Wolfgang!”

“YOU WOULD MAKE AN EXCELLENT MINION”

“They stand on guard for the king.”

“I'd best try to stay on their good side.”

“A formidable warrior, to be sure.”

“A most fearsome fishmonger!”

“The horns are an improvement.”

“Will grow up big and strong like that one day!”

“Are they a different type of bog monster?”

The Loyal Merm Guard is a Mob exclusive to the Don't Starve Together character Wurt. It was released on October 24, 2019.[1]

They behave like normal Merms except Loyal Merm Guards are immune to epic screeching, such as the screeching done by the Bee Queen.

Loyal Merm Guard without King of the Merms alive. 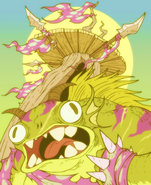 A Loyal Merm Guard as seen in a drawing from Art Stream # 94.

Retrieved from "https://dontstarve.fandom.com/wiki/Merm/Guard?oldid=468320"
Community content is available under CC-BY-SA unless otherwise noted.