"Resurrect yourself via the power of meat."

Resurrects the player on Death.

“What a handsome devil!”

“I'm just putting off the inevitable.”

“I'm not above using this.”

“A chance to learn from failure.”

“Who is that supposed to be?”

“Part of my soul is within.”

“Don't capture me likeness at all!”

“I thought bringing back the dead involved more levers and electricity.”

“I'm all for taking precautions, but does it have to look like that?”

The Meat Effigy is an effigy of Wilson which resurrects the player on Death. It is one of the three ways to be resurrected in the base game (the other two are wearing a Life Giving Amulet, or activating a Touch Stone before death). A Meat Effigy requires 4 Boards, 4 Beard Hairs, 4 Meat, and 30 maximum health to craft and a Prestihatitator to prototype.

Every Meat Effigy constructed lowers maximum Health by 30 points, which can only be restored if the Meat Effigy is destroyed or used for revival. Building up to 5 Meat Effigies will lower most characters' (all except for a mighty Wolfgang, an upgraded WX-78, Webber and Wigfrid, who are still killed by making more) Health to 0 and kill them, after which they will be revived and restored to 30 health.

An Ancient Pseudoscience Station can spawn Effigies when hammered. The health penalty of Effigies produced this way do not take effect until the character has died and been resurrected.

In Don't Starve Together, a Meat Effigy requires 4 Boards, 4 Beard Hairs, and 40 Health to craft and a Prestihatitator to prototype. Crafting a Meat Effigy does not lower maximum health.

In worlds with Caves, attunement is specific to each server. If a player has a Meat Effigy in the Forest, then dies in the Caves, the Meat Effigy will not be usable until that player travels up to the surface, which can be done in ghost form.

Wilson in comparison to a Meat Effigy.

Meat Effigies spawned from an Ancient Pseudoscience Station not affecting the character's health.

The character's health is affected after dying and resurrecting. 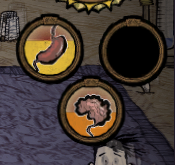 What happens when too many Meat Effigies are built.

Maxwell and a Burnt Meat Effigy in Don't Starve Together.

A Meat Effigy, as seen in the Six Feet Under trailer.