from the player's inventory when attacking

“He can steal my money, but not my soul.”

“He looks a little shady.”

“Theoretically, he's a rogue of some sort.”

“Argh! Stay away from me gold!”

“Don't like your attitude, but I admire your sense of style.”

The Masked Pig is a Mob exclusive to the Hamlet DLC, which can only be found in a Pig Town and its surrounding area.

As his clothing suggests, this Mob is a thief and will immediately become aggressive toward the player upon spawning if there is at least one Oinc in their inventory.

If Oincs are present in the player's inventory, the Masked Pig will start to follow the player, stopping occasionally like a spy would to avoid notice (a specific tune will be played at that moment). Once close enough to the player, he will charge and attempt to hit the player.

If the Masked Pig manages to land a hit, any type of Oincs in the player's inventory will be dropped individually on the ground. Each fallen Oinc will then have to be picked up one by one quickly, as the Masked Pig or any nearby Royal Guard will begin to steal them. Landing a hit on the Masked Pig will distract him from picking up coins and cause him to flee. 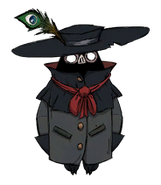 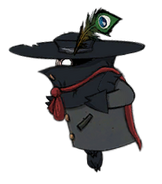 A Masked pig sneaking around on his tiptoes. 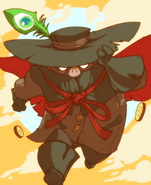 A Masked Pig as seen in a drawing from Art Stream # 70.
Community content is available under CC-BY-SA unless otherwise noted.
Advertisement