“I think I could use that.”

“I wonder if the rest burnt down.”

“Even stone can not withstand the constant pull of decay.”

“It shows the touch of a Roman artisan. How amazing.”

“Somebody must have built that.”

“I've always wondered who built those.”

“I would very much like to talk to the architect of that structure.”

“Nothing lasts forever in this world.”

“What was it meant to hold up?”

“I wonder how many counter tops I could get out of this...”

“A perfectly good marble column just sitting there for anyone to take.”

“A column of marble, so tall and so cold.”

“Whatever building it used to be a part of has been lost to time.”

Marble Pillars are naturally spawning Structures found around the Wooden Thing in a Chess biome in Sandbox Mode or in various Chess biomes in Adventure Mode. Usually, there are Clockwork Monsters and Evil Flowers near them. They can be mined with a Pickaxe or the Pick/Axe to acquire 2-3 Marble pieces (2 + 33% chance to get 1 extra). The pickaxe requires 10 hits to break a Marble Pillar down, whereas the Pick/Axe only requires 8. Though it may use a lot of durability off a pickaxe, it is recommended to mine Marble Pillars so the player can make a Marble Suit for fighting.

The three stages of a broken down pillar.

Wilson using his Pick/Axe on a Marble Pillar. 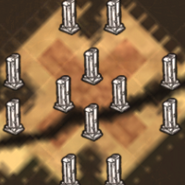 Marble pillars as they appear on the map.