"Show everyone what you've seen!"

Allows Map sharing with other players.

“The potential of the blank page is paralyzing for some.”

“There's nothing to be gleaned from this.”

“Mayhaps the ink is invisible!”

“There's nothing on it.”

“A blank map. Full of potential.”

“It doesn't really matter which way you go.”

The Map Scroll is a craftable Item exclusive to Don't Starve Together, introduced in A New Reign. It requires 1 Feather Pencil and 1 Papyrus to craft and is found in the Cartography Tab. This tab can only be accessed while standing next to a Cartographer's Desk, therefore the Map Scroll can not be prototyped.

Upon examination, the character will say who drew the Map Scroll and on which day. The Map Scroll contains the data of the preparing player's Map at the time of the scroll's creation. When used by another player, the knowledge in the scroll will be added to the user's Map. Therefore, players can organize map exploration and gain quicker access to full map knowledge. 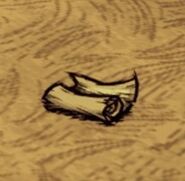 A Map Scroll dropped on the ground. 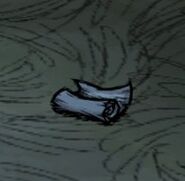