Can be befriended with the right food and by wearing the Mant Mask and Mant Suit.

“A creature of dirt and purpose.”

“ERROR: INSECT/HUMAN HYBRIDS DO NOT COMPUTE”

“What a hideous creature.”

“We should be friends!”

“WILBA WOULD BEAT THEE, BUT T'WOULD INFECT MINE HOOFS”

Mants are Mobs exclusive to the Hamlet DLC. They spawn from Antcomb Homes as Larvae, inside Mant Hills. Mants can mostly be found inside the Mant Hill, or wandering around it.

They are hostile Mobs, and will attack the player if they are too close. However, they will first warn the player to leave by glaring at them. Wearing a full set of Mant Armor as a disguise (i.e. Mant Suit and Mant Mask) will make them neutral to the player as long as the armor is worn. Their language is normally indecipherable but it can be understood with the Pherostone in the player's inventory. However, owning one without the Mant disguise won't prevent them from being aggressive.

Mants can be befriended by using the Pherostone to determine which food they eat, and then feeding the corresponding meat, seeds, plants, or wood. Befriended Mants will assist the player in chopping down trees and attacking mobs.

Upon death, they drop either one Monster Meat or one Chitin. When examined by a character, the displayed name will be “Drone”, followed by a six-digit number.

Mants will consume any food left on the ground. If the player is holding a Magnifying Glass, nearby Mants will panic. During the Aporkalypse, all Mants will transform into aggressive Warrior Mants wearing glowing warpaint.

Mants take two Sleep Darts to be put to sleep, and two hits from an Ice Staff to be frozen.

“Yeesh. What are you so angry about?”

“Looking to kill something.”

“Calm down there, buddy!”

“Such a grotesque display of aggression.”

“I want no trouble, mon amie!”

Mant Warriors are mobs exclusive to the Hamlet DLC. They are similar to regular Mants, but they are only encountered deep inside of the Mant Hill or during the Aporkalypse, where they wear glowing war-paint and take the place of normal Mants. Compared to regular Mants, Mant Warriors are faster, more powerful, and always attack the player on sight. They are also not fooled by the Mant Mask and Mant Suit disguise.

They will spawn from Queen Womant's eggs, which will spawn Warrior Mants 2 to 6 seconds after landing.

Upon death, they drop either one Monster Meat or one Chitin. When examined by a character, the displayed name will be "Warrior", followed by a six-digit number.

Mant Warriors take one Sleep Dart to be put to sleep, and two hits from an Ice Staff to be frozen. 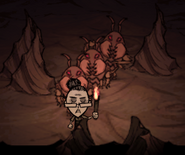 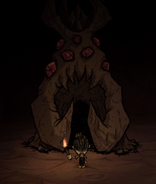 The Discovery of the Warrior Mant Door.

A Warrior Mant with glowing war-paint chasing Wilson during the Aporkalypse.