“Is rock left by angry volcano.”

“The earth's guts, cooled and ready for mining.”

“A little rearranging and it'd make a nice inukshuk.”

“A collection of igneous rocks. Theoretically from a volcano.”

“It's a bunch of stony stones.”

“Could be something buried thar.”

“One thing adventuring has taught me: always check under the rocks.”

Magma Piles are naturally-spawning Structures in the Magma Field and Volcano Biomes in the Shipwrecked DLC. They are piles of igneous rocks which may be dug using a Shovel, using 4% of the Shovel's durability per dig. They must be dug 6 times to be removed, and 2-3 items will drop every 2 shovel digs. The gold-flecked Magma Pile has a chance to drop Gold Nuggets, while the regular one can drop Nitre. Both types also drop Rocks, Flint, and very rarely, red or blue Gems. Sometimes a Krissure, a sort of flaming geyser, will erupt after digging up a pile. This chance is higher while in the Volcano than in the Magma Field. Upon a Krissure's eruption, the final dropped items will be scattered about half a screen away. Magma Piles in Volcano Biome are renewable, after they are destroyed, a new one has a chance to spawn at the same location during Dry Season.

Woodlegs next to a few Magma Piles. 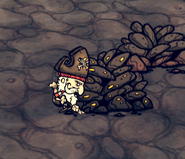 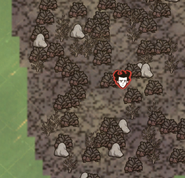 Magma Piles as seen on the Map.
Community content is available under CC-BY-SA unless otherwise noted.
Advertisement