"Pull power from the heavens."

“Warm to the touch.”

“It seems to absorb the darkness around it.”

“A brief light in my dark life.”

“This amulet is glowing at the mid 530 nanometer wavelength.”

“I could cut wood at night with this.”

“This will make me stand out.”

“A dark fuel infused discharger of kinetic and light energy.”

“A star, captured within an amulet.”

“I absolutely glow when I wear it!”

“Puts some pep in my step!”

“I be a walkin' lighthouse!”

“Puts a light on my chest and a spring in my step.”

“I'll give my brain a slight refrain.”

“With this on, I'm invincible! Right?”

“Just the boost I needed.”

While equipped in the chest slot, it will provide a small amount of light around the player (similar to that of a Torch), preventing attacks from Charlie, and grant a 20% bonus to movement speed. It will also provide the Character with a passive +2

The Magiluminescence will slowly lose durability while equipped, and it will last for 8 minutes (1 Day). That said, it can be refueled with Nightmare Fuel, which will increase its durability by 37.5% (3 minutes) per every 1 Nightmare Fuel.

Since Yellow Gems are not renewable, only a limited number of Magiluminescences can be crafted.

In the Reign of Giants DLC, players have a 0.01% chance of finding Yellow Gems inside Tumbleweeds.

In the Shipwrecked DLC, Yellow Gems can also be found in X Marks the Spot Chests, while the Magiluminescence has a chance to come out of the Slot Machine.

These make Magiluminescences renewable in both DLCs. 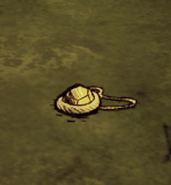 A Magiluminescence dropped on the ground.

The range of a Magiluminescence's light.
中文
Community content is available under CC-BY-SA unless otherwise noted.
Advertisement