“Or I could just burn my way through.”

“A LONG BLADE FOR EXPERT HACKING”

“Used for hacking through the brush.”

“Truthfully I was always a hack.”

“A pragmatic tool for slashing objects.”

“I could chop many an onion with this!”

The Machete is a tool introduced in the Shipwrecked. It is used to hack Bamboo Patches, Viney Bushes, and Coconuts. The Machete also can be used as a weapon, dealing 29.92 damage per swing. It has 100 uses regardless of how it is used. It can be crafted right from the start with 1 Twig and 3 Flint.

“What a fancy blade to ruin bamboo with!”

“The most malleable of metals, but let's see how it slices.”

“It chops AND sparkles!”

“Gold is so plentiful here I can use it in household tools.”

“I shall swing yöu with pride.”

“What a beautiful blade!”

“For the sophisticated adventurer.”

The Luxury Machete is a version of Machete that can be crafted using Gold Nuggets instead of Flint, making it easily renewable. It requires 4 Twigs and 2 Gold Nuggets to craft, and an Alchemy Engine to prototype. It has 400 uses, 4 times as much as the regular Machete. Similar to Machete, Luxury Machete deals 29.92 damage per swing when used as a weapon.

Hacks faster.
Gains charges for heat and light outside of Hurricane Season.

“A fire machete is a girl's best friend!”

“The blade both bites and burns.”

“It singes everything it touches.”

“This seems like a dangerous thing to farm with.”

“An adamantine blade with exothermic properties.”

“It cooks with each cut!”

“You could overheat swinging this thing too much.”

“It's a machete and a hand warmer.”

Players should take caution when using an Obsidian Machete with high levels of charge, as any plants ignited by the Obsidian Machete can potentially ignite other nearby trees, resources or Structures. When using this item as a weapon, players should remember that the Mobs that are killed while on fire will drop cooked variants of the food items and Ashes for flammable resources they would otherwise drop. Some Mobs will also panic when on fire, running in random directions, potentially igniting other mobs, resources or Structures around them.

Both Machetes and Luxury Machetes are also present in the Hamlet DLC. They can be used to cut down Tall Grass, Tuber Trees and vines blocking Ruinous Entrances and doorways in the Ancient Pig Ruins. Regular Machetes are sold at the Pigg and Pigglet's General Store for 5 Oincs. 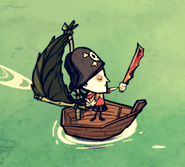 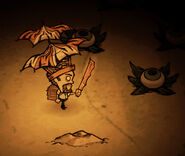 Warly using an Obsidian Machete, as seen in the Shipwrecked trailer.
Retrieved from "https://dontstarve.fandom.com/wiki/Machete?oldid=436198"
Community content is available under CC-BY-SA unless otherwise noted.