“Don't you recognize me?”

“I wish I could converse with them, but they appear hostile to strangers.”

“I don't think he wants to be friends with us.”

“They move faster than you'd think.”

“If only I could grow a mustache like that.”

“His horns are on the wrong way.”

“He look big and important, florp.”

“I need a closer look at those tusks!”

MacTusk is an aggressive Mob that spawns at Walrus Camps during Winter. He is the leader of Mactusk N' Son and will always be found traveling with his son, Wee MacTusk, or two Blue Hounds. They respawn every 2.5 days after being killed. When killed, he drops 1 Meat, 1 Blow Dart, 1 Walrus Tusk with a 50% chance and 1 Tam o' Shanter with a 25% chance.

MacTusk is only active during the day. He will pursue the player, if they are in sight, often sending in the Hounds with his battle-cry. He attacks using a Blow Dart while also trying to keep his distance. The Blow Dart he uses has a longer range than the player's version, but it also deals less damage. The player can dodge his darts when timed correctly. Using a Walking Cane or Roads will raise their chances.

Below is the number of hits it takes with each weapon to kill MacTusk when playing with characters with a default damage modifier. The Weather Pain is not included due to the random nature of its projectile..

MacTusk takes 2 blasts from the Ice Staff to be frozen and 1 Sleep Dart to be put to sleep.

MacTusk as seen in the poster for A Winter's Tale update.

Idling MacTusk with his party. 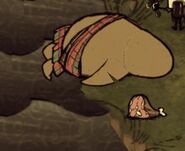 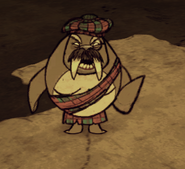 A bug that causes MacTusk to walk on the ocean if the Walrus Camp is close to it.

Wilson fleeing from a MacTusk. 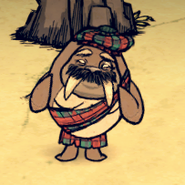 MacTusk as seen in a drawing from Art Stream # 57.
Community content is available under CC-BY-SA unless otherwise noted.
Advertisement