“Now I can harness the heavens!”

“All the lightning can come here!”

“Weather's not going to get the drop on me now.”

“A little bit of protection.”

“Attracts the electrostatic discharge of a lightning strike.”

“It's powered by electricity.”

“Does disguising itself like lightning help it do its job?”

“That's one way to get electricity.”

“It's brimming with elemental energy.”

“Scale-less can call down lightning?”

“That's where we keep the lightning.”

“Just in case the sky starts getting any funny ideas.”

The Lightning Rod is a Science Structure that attracts Lightning strikes. It requires 4 Gold Nuggets and 1 Cut Stone to craft and a Science Machine to prototype.

When placed, the Lightning Rod diverts Lightning to the rod, thus preventing ignition from nearby flammable objects such as Berry Bushes, Saplings, Grass Tufts, and Trees.

To connect protection areas with multiple Rods using simple math, players should leave 14 Pitchfork tiles between each Rod horizontally/vertically. The player should try to imagine each zone as a square of 56 units in length by width instead of a circle for easier comprehension. If each Rod is placed 14 Pitchfork tiles between one another horizontally/vertically, it will create a protection grid with minimum excess overlaps.

(See the Console/Commands page for instructions on measuring distance; distance can be measured with a Pitchfork's 4x4 dig area).

The Lightning Rod also provides a small radius of light (but not heat) after absorbing a Lightning bolt, which is just bright enough to prevent Charlie from attacking. The light lasts for a few Days and will go dark as soon as morning comes. One might also benefit from its light to gain time to create a fire.

In all DLCs and DST, the cost to craft a Lightning Rod is increased to 4 Gold Nuggets.

If a Lightning Rod and a Volt Goat are in close vicinity in the Reign of Giants DLC, they both have an equal chance of being struck by Lightning.

A Lighting Rod can be used as a light source. 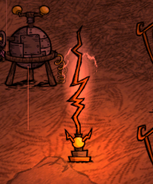 Lightning Rod as seen in the poster for the Doorway to Adventure update.