“You could read by that light.”

“Is it radioactive? I hope so.”

“And it lit up the night, upön the darkest höur.”

“Oooh, a glowing ball of flower!”

“I want a whole wreath of them!”

“Thet thar be a pretty flower.”

“Woah! It doesn't even need electricity!”

“How kind of you to light my way.”

“Will I start glowing if I eat it?”

“I don't have time to stop and smell the flowers.”

Light Flowers are plants that serve as sources of light that can normally be found in Caves and Ruins. They are generated all over the caves but mostly spawn in Cave Swamp, and Wilds in the Ruins.

Light Bulbs can be picked from Light Flowers. There are three types of light flowers, each yielding a different number of Light Bulbs.

The Light Flower is a small light source, capable of protecting the player from Charlie's attacks. It ceases to act as a light source once picked. The double- and triple-bulb plants yield 2 and 3 bulbs respectively when picked. It takes 3 days for a flower with one bulb to regrow, 4–5 days for a two-bulbed flower, and 6 days to spawn a three-bulbed flower.

Light Flowers cannot be relocated elsewhere with a shovel, and are thus limited to their natural habitat in Caves and Ruins.

In Don't Starve Together, the Light Flowers are lit when another light source is present. They remain on for 94 to 98 seconds and then enter a dormant phase where they do not produce light. The dormant phase lasts from 114 to 128 seconds, after which they can be turned on again.

They are also renewable through Regrowth. The Reanimated Skeleton also creates a trail of Light Flowers as it walks, which can be picked for their bulbs. However, these Light Flowers disappear after a few seconds. 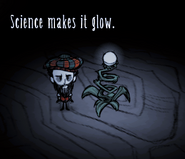