Sets anything near it on fire.

“Too hot to handle.”

“It burns with the fires of Hell.”

“I believe it is a larval dragonfly.”

“I remember when I was that age.”

The Lavae is a Mob exclusive to Don't Starve Together. It has 500 health and spawns from the Dragonfly. Anything that comes into direct contact with or is next to a Lavae will burst into flames, including the player. The Lavae is immune to fire.

Killing the Lavae will leave Ashes from its burnt drop, making it easier to get the Dragonfly back to sleep.

The Lavae dies when it is frozen, dropping 1-5 Rocks upon death. Freezing is the easiest way to kill Lavae due to their high health, attack damage, and the fact that many can be spawned in a relatively short time. It takes three hits with the Ice Staff to be frozen. The Lavae will also die 30 seconds after being spawned by the Dragonfly. 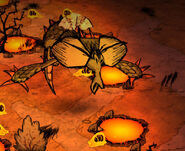 The Dragonfly spawning a Lavae.

Lavae despawning after their Dragonfly has been killed.

Lavae in the Don't Starve Together launch trailer.
Community content is available under CC-BY-SA unless otherwise noted.
Advertisement