Provides light when carried or placed

“Fire is not meant to be contained like this!”

“It keeps me safe from dark.”

“I hope this keeps Them away.”

“A portable source of illumination that will no doubt come in handy.”

“A lantern för the darkness.”

“We have captured the sun.”

“It really lightens the mood.”

“Portable light for when you're tired of lighting things on fire.”

“I'd better keep this close, just in case.”

The Lantern is a portable, refuellable light source that can be either equipped or placed on the ground to provide light. It requires 2 Light Bulbs, 3 Twigs, and 2 Ropes to craft and an Alchemy Engine to prototype. The Lantern at full durability has the same light radius as a miner hat, therefore it is ideal for spelunking.

The Lantern can be used as a weapon, but it will only deal as much damage as the character's fist (10 damage for normal damage multiplier characters).

A Lantern turned on.

A Lantern turned off.

Lanterns with ground tone for light comparison during the day. 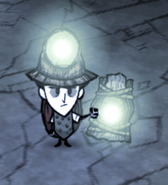 A Wendy figure next to a toy Lantern.

Lantern as seen in the poster for the Underground update. 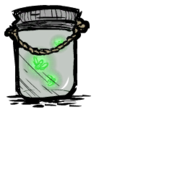