“Maybe I should stand back.”

“Watch Wolfgang walk over this!”

“THE EARTH IS JUST VENTING”

“What a stunning display!”

“That puts on quite a spectacle.”

“A chance peek into the planet's core!”

“The ground is angry.”

“A big crack in the ground. That's not suspicious at all.”

Krissures are objects found in the Shipwrecked DLC. After a player has dug up a Magma Pile, a Krissure may appear and erupt. Krissures will alternate between dormant and erupting states. It can be used as a Light source, but it may burn if a player stands too close. Note that it's the initial burst of krissure that sets things on fire, not the lasting flame itself. The player can cook Food over an erupting Krissure. Flooded Krissures do not erupt.

Sprinklers in the Hamlet DLC can be used to stop a Krissure from erupting, but caution should be taken when removing said sprinkler. 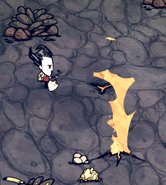 Wilson next to a Krissure.

Webber between two Krissures. It is also obvious that they can be used as a light source in the picture.
Community content is available under CC-BY-SA unless otherwise noted.
Advertisement