Don't Starve Wiki
Register
Don't have an account?
Sign In
Advertisement
in: Mobs, Shipwrecked, Don't Starve Together,
and 3 more
English

Krampus (plural Krampi) is a neutral Monster that steals the player's stored items and items left on the ground. He will spawn if the player exceeds the naughtiness level, or "karma" rating, by killing "innocent" Animals with weapons or by murdering them in the inventory (see the Naughtiness section below). As the player gets closer to spawning Krampus, a hissing noise will be heard, warning the player every time innocent creatures are killed. The player will hear a unique piercing noise upon Krampus' spawn. Not acting "Naughty" for a while gradually decreases the naughtiness level.

Without adequate preparation, Krampus, especially when more than one spawns at the same time, could wreak havoc in players' bases. Players are advised to pay attention to the signs of naughtiness, and only summon Krampus when preparations are complete, away from important items and the player base. Krampus can be summoned by killing a number of passive creatures in quick succession. Rabbits can be collected with Traps then "murdered" in the inventory, Birds can be summoned using a Feather Hat, then either captured and murdered by Bird Traps or directly killed using a Boomerang.

Krampus' high melee damage and tendency to avoid the player makes him difficult to deal with using melee weapons. However, his low health make the ranged weapons, especially Blow Darts, effective. If melee is the only option, players should wear Armor and use high damage weapons such as a Dark Sword or Ham Bat to avoid significant health loss. He can also be put to sleep or frozen, to make him an easy target. Placing a number of easily obtainable item such as single pieces of Twigs, Cut Grass or Pine Cones will keep the Krampi occupied allowing the player to close in to the melee range. Since Krampus is considered a monster, Pigs and Bunnymen are aggressive towards Krampus by default, so Pig Villages or Bunnymen Villages can be utilized to kill Krampus. Below is the number of hits it takes with each weapon to kill a Krampus when playing with characters with a default damage modifier. The Weather Pain is not included due to the random nature of its projectile.

In the Reign of Giants DLC, killing Glommer will immediately summon Krampi as it increases naughtiness by 50 points, the exact amount needed to spawn Krampus.

In the Shipwrecked DLC, Krampus wears an Hawaiian Shirt. By killing the Seal form of Sealnado, the player will also summon Krampi immediately. Eating Shark Fin Soup adds 10 points of naughtiness, which can also be used to summon Krampi. Killing Doydoys adds progressively more naughtiness as there are fewer Doydoys in the world. Killing the last two Doydoys will guarantee a Krampus spawn each, however, this is not recommended as this makes it impossible to breed more Doydoys later. This can be circumvented by bringing two Doydoys to the Volcano, as it is considered a separate world, or by collecting enough materials to fabricate 2 doydoy nests + having a minimum of 2 doydoy eggs: so, despite killing the las two doydoys remaining alive, the player can repopulate the island when placing the eggs in the empty nest.

As Krampus cannot spawn on the Ocean, he will not appear immediately if the player is at sea while exceeding the naughtiness threshold. This delay also applies, if the player kills an innocent creature on land using a ranged weapon from a Boat, i.e. a Boat Cannon. Krampus will then spawn once the player kills the next creature while on land. Entering the Volcano at the peak of the naughtiness threshold will also cause it to spawn instantly.

In Don't Starve Together, naughtiness is calculated individually for each player. While Krampus spawns in the vicinity of the naughty player, anyone near them will also hear the warning hisses. In A New Reign, a pair of Krampi can be summoned by Klaus during the fight. 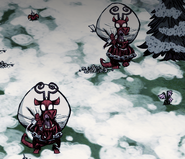 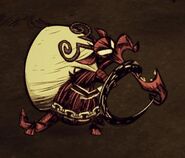 A Krampus escaping into its sack, taking all stolen items (Old appearance). 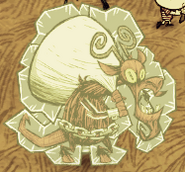