King of the Merms

“Are you supposed to be important or something?”

“Wolfgang would like to challenge him to arm wrestle!”

“He does look very regal, despite the warts.”

“I WANT HIS CROWN”

“He seems to be the one in charge here.”

“He's got a pretty impressive beard.”

“Are you the boss around here?”

“Slimy is the head that wears the crown.”

“Yay! You look just like Kings from fairy stories!”

“The king of the bog monsters!”

The King of the Merms is a Mob exclusive to the Don't Starve Together character Wurt.

The King of the Merms appears after feeding a Merm on the Royal Tapestry. He has 1000 Health and regenerates 2

per second. He cannot attack or move but he spawns up to 4 Loyal Merm Guards when King's health drops below 75% that disappear when the attacker is killed or out of range. When killed, they regenerate after 1 day.

Upon spawning he has 50 Hunger, then he can be fed up to 200 maximum hunger using the same set of Foods that Wurt eats. Hunger drain is 50 per day. When his hunger reaches zero, his health will deplete in 2 days.

As long as the King of the Merms is alive, all Merms receive a stat boost. Wurt players change stats to 250 Health, 250 Hunger and 200 Sanity corresponding of a bonus of +100

When the King of the Merms is alive, Merms and Loyal Merm Guards are neutral to all creatures and players.

Wurt or a player wearing a Clever Disguise can offer Freshwater Fish, Live Eel or Ocean Fishes to the King of the Merms in exchange for various resources. The table below lists the possible gifts.

King of the Merms talks depending on his hunger

< 50
What take so long? Make offerings to your King! 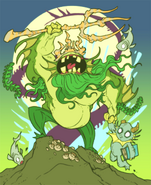 The King of the Merms as seen in a drawing from Art Stream # 93.
Retrieved from "https://dontstarve.fandom.com/wiki/King_of_the_Merms?oldid=488375"
Community content is available under CC-BY-SA unless otherwise noted.