While neutral, they can be attacked by holding Ctrl and clicking, and will not obey physics. If hit, they will disappear in a puff of smoke, and reappear somewhere in the close proximity of the player.

Up to three will spawn around the player, and begin to attack. Upon being killed, Hallucinations will sometimes drop Nightmare Fuel, used for crafting several Magic items.

The sanity meter will drop by both standing near and fighting Hallucinations, but will rise by at least 15 points when killing them.

Originally believed to be the name of all the Hallucinations, the Crawling Horror is now known to be just one type.

It is a large tick-like creature, with many legs, and is the most common of the Hallucinations.

Crawling Horrors turn aggressive when the player's sanity is 30 or below. Walking near these will decrease Sanity. They give 15 Sanity when killed.

The Terrorbeak is a creature with an enormous beak and slim body, with several small legs. Like the Crawling Horror, it will attack the player, but is less common.

Players can attack them most easily by trapping them on the coast or by hitting them with a Boomerang.

If you are being attacked by Hallucinations, killing a Terrorbeak is a good way of stopping the attacks, as they give 30 Sanity when killed causing Hallucinations to go neutral again, even at 0 sanity.

Mr. Skits is a small serpent like creature that will watch from afar. Upon attempting to reach Mr. Skits, it turns and slithers away. They are harmless, and cannot be attacked.

Mr.Skits may also flicker on the screen for a fraction of a second, then disappear.

He will only appear if the sanity level of the player is below 165. His only purpose is to scare players of Don't Starve.

Night Hands are hallucinations that extend from the darkness at night. While not directly attacking the player, Night Hands will attempt to do damage by putting out fires. Up to 3 Night Hands can spawn at the same time.

When stepped on, Night Hands will shrink away from the player (with a small Insanity Aura aura -40/min).  Once far enough into the darkness, a Night Hand will disappear. If not taken care of, a Night Hand (or 2-3) can easily take out a small fire, reducing 50% of the fire's strength each.

They do have the potential to actually put out a fire if this occurs, however it is extremely rare and the more hands that appear, the less they can damage a fire (I.e. 1 Hand = <60% per hand. 3 Hands = <30% per hand).

If the fire is at its highest strength then it is unlikely that even three hands can completely snuff it out, so a potential tactic is to max the fire and stand near to max it out again after the attack, although this burns quite a few resources and does not get rid of the Night Hands.

Occasionally, even when sanity is over half full, this particular hallucination can still appear.

When your sanity is below 160, several Eyes will pop out of the darkness. They are purely for atmosphere and have no effect. They disappear when stood upon.

The lower the player's sanity, the more eyes spawn with increased intensity. They will go from round, small, and sometimes curved eyes to larger, sharp, menacing ones. Sometimes trees or other structures can block eyes, commonly forming a one-eyed hallucination. 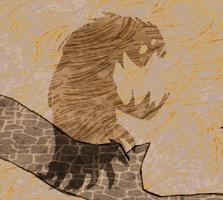 A crawling Horror, taking a break, standing up tall and showing its teeth.
Hallucination.png
Wolfgang being attacked by a Terrorbeak.
2013-02-15 00001.jpg
Two night hands are approaching the fire pit.

Retrieved from "https://dontstarve.fandom.com/wiki/Insanity_Creatures?oldid=89612"
Community content is available under CC-BY-SA unless otherwise noted.