“I can smell him from here!”

“Bet you think you're safe in all that armor.”

“Is not scaring Wolfgang.”

“You are a prisoner of your own doomed destiny.”

“STILL A WEAK FLESHLING UNDERNEATH THAT ARMOR”

“That lock must be heavy on its snout.”

“Gotta chop that armor up.”

“Back to the dungeons with you!”

“All that armor must be heavy.”

“I can smell him from here!”

The Infernal Swineclops is a mob exclusive to The Forge event in Don't Starve Together. It serves as the current final boss for the event. It appears to be a boar, bull, and beetle tribrid. It wears spike-covered green battle armor with a huge beetle-like carapace. It also appears to have a golden lock on its snout that moves in both modes, as well as a chain on its torso connecting to the battle armor and the aforementioned carapace, gauntlets on its wrists, and a collar surrounding its neck. The Infernal Swineclops' overall distinction with the Grand Forge Boarrior is that it is taller and wider than the Grand Forge Boarrior, it is also a boxer, and it doesn't appear to be injured.

The 1st phase has it sticking to defense mode, which leaves it quick and susceptible to stuns, unless the player who gained aggro somehow forces offense mode through the aid of the other player(s). Nearing the end of the 1st phase, the Infernal Swineclops begins to attack in offense mode instead of only using it in the Living Staff's Life Blossom, or, when waking up, initially. The 2nd phase has the Infernal Swineclops roaring and beating on its chest, introducing how bad offense mode is to fight if one were to facetank it. Offense mode in this form allows its punches to chain into each other, including a "temper" slam if enough damage was taken in this phase or if someone used a ranged weapon-type special attack. The 3rd phase has the Infernal Swineclops have the deadliest offense mode possibly seen. Offense mode has the flurry of seemingly infinite punches, and if a tank gets too close, it will easily tear through them if interruptions aren't made to this attack.

If the Infernal Swineclops dies, its helm breaks, revealing its real eye, some additional fur during its fall, and its "forewings" twitch once he's on the ground as the camera locks onto the final boss, unless the player moves farther away from it. If the team is defeated by the Infernal Swineclops, it throws a flower similar in appearance to a flower in the Living Staff's Life Blossom up in the air and poses with its back turned. 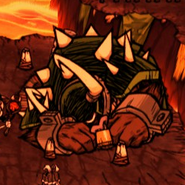 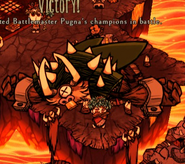 Infernal Swineclops as seen on The Forge advertisement. 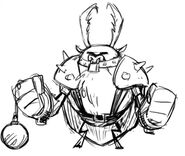 Concept art for the Infernal Swineclops from Rhymes with Play #215.
Tiếng Việt
Community content is available under CC-BY-SA unless otherwise noted.
Advertisement