“I wish you'd shut your lid and stop putting out fires.”

“I can throw better.”

“I don't know why you bother. We're all going to burn.”

“This would come in handy in a snowball fight.”

“This area be protected from fires.”

“Nothing keeps fire away like chucking pieces of ice at it.”

“Witness the efficiency of the future!”

“It is ready to fling at a moment's notice.”

“That should keep us from setting the camp on fire... hopefully.”

The Ice Flingomatic is a craftable Structure from the Reign of Giants DLC. It requires 2 Gears, 15 Ice, and 2 Electrical Doodads to craft and an Alchemy Engine to prototype.

The Ice Flingomatic can be turned on and off by the player. When turned on, the Ice Flingomatic will automatically launch snowballs to extinguish any smoldering objects or Fires, within its range. This also includes Campfires, Fire Pits, Night Lights, and Endothermic Fires. It will not target players holding Torches (or Willow's Lighter).

The Ice Flingomatic has a limited fuel tank, indicated by a red gauge on the front of the unit. A full tank will last 5 days and can be refueled with any fuel substances, such as Logs (9%) or Rot (3%), as well as Nitre (19%), Glommer's Goop (50%). As long as the Ice Flingomatic is turned on, it will consume fuel over time. Extinguishing fires and reviving withered plants do not consume additional fuel.

The Ice Flingomatic will target Farms and withered Berry Bushes, Grass Tufts, and Saplings, allowing them to be harvested normally throughout Summer.

In the Shipwrecked DLC, the Ice Flingomatic can be flooded.

In the Hamlet DLC, Wormwood can be frozen by Ice Flingomatics.

In Don't Starve Together (DST), when an Ice Flingomatic is interacted with, instead of being turned off, it will go into "Emergency Mode." In this state, the Ice Flingomatic will be in a similar state to its RoG counterpart when turned off, in that it will not save plants or crops from withering or automatically put out all fires within its range, but if a large uncontrolled fire is detected nearby, the machine will sound an alarm, lighting the light bulb on its top and playing a tone. If the machine is not manually turned on or if the detected fire is not extinguished within 15 seconds of the alarm sounding, the Ice Flingomatic will turn itself on and attempt to control the fire automatically.

After the fire is controlled, if no more fires are detected for 25 seconds, the Ice Flingomatic will turn itself off again. When automatically responding to an emergency, an Ice Flingomatic cannot be manually turned off once it has been activated. A working Ice Flingomatic can emit enough light to ward off Charlie. An Ice Flingomatic without Fuel can still launch snowballs to extinguish Fires. However, its efficiency is low and ignores smoldering objects.

Ice Flingomatic's building silhouette showing that its radius is 11 units of wall. 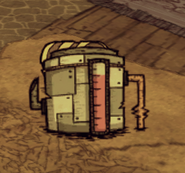 A turned off Ice Flingomatic that has used some fuel.

The Flingomatic being used to freeze mobs near a fire.

A Flingomatic in Emergency Mode detecting and subsequently automatically attempting to extinguish a group of burning Saplings in DST. Note the red light when responding to the emergency instead of the normal green one.
Retrieved from "https://dontstarve.fandom.com/wiki/Ice_Flingomatic?oldid=492756"
Community content is available under CC-BY-SA unless otherwise noted.