"Keep the nasties away. By killing them."

Can be placed as a Structure

“I wish it lit stuff on fire.”

“Mighty structure will help me fight!”

“I HAVE TAMED MIGHTY BEASTS TO FIGHT FOR ME.”

“The magic of the two beasts has been concentrated by the Thulecite.”

“That'll drive the hosers off.”

“Some of my better work.”

“It forms a loyalty to its manufacturer! How fascinating!”

“Stop looking at me!”

“This is my friend, Lazer Oeil!”

“IF WILBA BUILD IT, WILL IT BOOM?”

“What are you looking at?”

“That's a fine piece of work.”

Houndius Shootius is a craftable Item found in the Ancient Tab. It requires 1 Guardian's Horn, 1 Deerclops Eyeball, and 5 Thulecite to craft, and can only be crafted near an Ancient Pseudoscience Station. Like all items from the Ancient Tab, Houndius Shootius cannot be prototyped and Characters always need to be near an Ancient Pseudoscience Station to craft them again.

Once placed, the Houndius Shootius becomes a permanent Structure that will act much like an immobile Mob. It will automatically attack Mobs targeting the Character or any Mob that the player attempts to attack, except for Shadow Creatures. The Houndius Shootius briefly emits some light when charging a shot.

It has 1,000 Health and its projectile deals 65 damage per hit. When damaged, it will regenerate 12 Health per second and can also be repaired using non-edible healing Items. Its crafting materials cannot be recovered using a Hammer or Deconstruction Staff so it can only be "killed" in battle, which will not yield any drops. Care must be taken in deciding where to place one because the crafting materials cannot be recovered from a placed turret in any way. Each turret will drain 6.25

per minute when the Character is close to them. 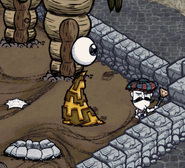 The Houndius Shootius will stare at the player when they're nearby.
Français
Community content is available under CC-BY-SA unless otherwise noted.
Advertisement