“I've got no bones to pick with the owner. Really.”

“Is house of bones.”

“Home to the foulest creatures.”

“Those bones are foreboding.”

“I know better than to mess with that.”

“It's a tunnel down to the hounds' nest.”

“Are there hounds hiding within it?”

“This place scares us.”

“I think there are some angry pups lurking nearby.”

“Typical. Dogs never clean up after themselves.”

“So that's where they're comin' from.”

Hound Mounds are naturally spawning objects formed in both Sandbox Mode and Adventure Mode, though it is more likely to be found in the latter. They house up to 3 Hounds which spawn in 5 second intervals until the mound is empty. they're usually found in either the Rockyland or Forest biomes. Hounds that are killed will gradually regenerate at a rate of 1 every 30 seconds.

As stated by Maxwell, the mound itself acts as an entrance to a tunnel leading to the subterranean Hound nest. Conceivably, destroying this entrance blocks the tunnel and traps the Hounds underground.

Usually a Hound Mound is surrounded by lots of Bones and other mounds; this makes the place dangerous as players may be killed easily by numerous Hounds in a short time.

They have 300 Health and drop 3 Hound's Teeth with a 1% chance each of dropping a Blue or Red Gem when destroyed.

When hit, all hounds that are housed in the mound, but have not yet spawned will spawn, with a chance for each of these to be a red hound (summer) or blue hound (winter). This chance begins at 0% on day 1, and gradually increases to a maximum of 50% on day 75.

In the Reign of Giants DLC, Hound Mounds can be found commonly in the Desert Biome, often in a cluster. An additional 2 Bone Shards will be dropped when destroyed.

The mounds now house between 2-3 Hounds, and have a 20% chance to spawn a red hound instead of a regular hound in summer. When hit, the mound has the same behaviour as the base game, but will also spawn Blue Hounds in Spring, and Red Hounds in Autumn.

Hounds now spawn from mounds in 30 second intervals, and Hounds that are killed regenerate at a rate of 1 every 2 minutes.

In Don't Starve Together, Hound Mounds regenerate killed Hounds at a rate of 1 every 3 minutes.

Hound Mounds in a Desert Biome. 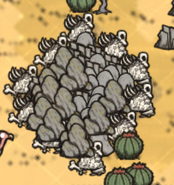 A Set Piece with Boulders surrounded by Hound Mounds.

Hound Mounds on a Map in Reign of Giants.
Retrieved from "https://dontstarve.fandom.com/wiki/Hound_Mound?oldid=443354"
Community content is available under CC-BY-SA unless otherwise noted.