Can travel both land and water.
Can spawn two types of Waves.

“Sure you have impressive horns but can you light fires.”

“Is mighty but Wolfgang is mightier!”

“Even you cannot cheer my heart.”

“Reminds me of something I saw in Algonquin Park once.”

“You look large and in charge.”

“THOU ART AS FAT AS BUTTER!”

The Hippopotamoose is a neutral Mob exclusive to the Hamlet DLC. It resides in or around the Lily Pond biome, entering and exiting the water at its leisure. It remains neutral toward the player until attacked.

If one Hippopotamoose is attacked, nearby Hippopotamoose will become hostile and approach the player. They have a close range bite attack, as well as a long-range jumping slam attack which can knock down Trees and uproot Tall Grass, Saplings, bushes and other plants, and destroy walls.

When moving through the water, they cause small Waves to appear, which can make the player wet and damage their Boat.

Hippopotamoose roam in "pairs" and reproduce periodically (2 days) as long as at least one remains. 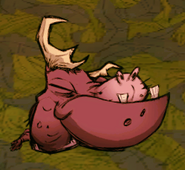 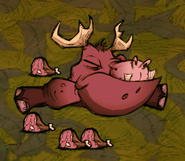 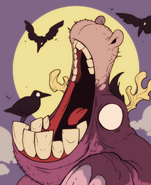 A Hippopotamoose as seen in a drawing from Art Stream # 75.
Tiếng Việt
Community content is available under CC-BY-SA unless otherwise noted.
Advertisement