“What happened to the head?”

“Such a nice statue. Shame if something were to happen to it.”

“Where is pretty music?”

“Maybe these statues will keep me company.”

“SOMEONE FORGOT TO INSTALL THE HEAD MODULE.”

“Who could this be modeled after? And where is his head?”

“It must be Gunnar. The snakes töök his head.”

“Someone took the head.”

“Wow. How does he play without looking at the strings?”

The Harp Statue is a Structure that can be mined with a Pickaxe for 2-3 Marble. It looks like a headless angel with a harp in its hands.

Players may find a Harp Statue around the Wooden Thing in Sandbox Mode and easily in the Adventure Mode world, The Game is Afoot, as there is a large Chess Biome there.

The Harp Statue when mined. 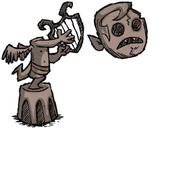 Statue with its head as found in the game's files.

A Set Piece the Statue is found in.
Retrieved from "https://dontstarve.fandom.com/wiki/Harp_Statue?oldid=433505"
Community content is available under CC-BY-SA unless otherwise noted.