"It takes food to make food."

“Pleased to meat you!”

“I'm not sure this was the most efficient use of resources.”

“What a waste of good ham.”

“An undignified weapon for a less refined time.”

“An interesting way to use food.”

“I can fight food with food.”

“Oh good. I was looking for a way to work on my swing.”

“I'll bring it down with a mighty hamTHWACK!”

“Use meat for hitting? Never thought of that, florp.”

“Well, the pig had it coming.”

The Ham Bat is a Melee Weapon which deals 59.5 damage. It spoils after 10 days and has unlimited uses during this period. Despite being made out of meat, it cannot be eaten by the player or other mobs and will not anger a Bunnyman when in the player's possession.

The Ham Bat requires 1 Pig Skin, 2 Twigs, and 2 Meat to craft and an Alchemy Engine to prototype.

In DLCs and DST, the Ham Bat's damage will now decrease as the weapon spoils. The highest damage is 59.5 when fresh, and the damage decreases by about 0.37 per minute or 2.975 per day until it reaches its lowest damage of 29.75, just before turning into Rot. It becomes weaker than a Tentacle Spike after 2.86 days, weaker than a Battle Spear after 5.71 days, and on the 8.67th day, it's about as powerful as a Spear.

This ham bat was fashioned after the scepter of the great Battlemaster Pugna.
See ingame

Loyal
Fishy Bat
This portly pufferfish is trying to pass itself off as pork.
See ingame

A Spider figurine by a Ham Bat.

Wilson's Weave along with the Ham Shank on the promotional banner for Don't Starve. 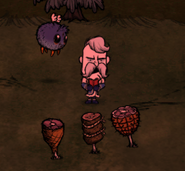 Wolfgang caroling with the default Ham Bat and the two Ham Bat skins.