watch 04:21
Wiki Targeted (Games)
Do you like this video?
Play Sound
“Abigail? Come back! I'm not done playing with you.”

This is a guide for playing as Wendy, the Bereaved. It will give a general summary of her strengths and weaknesses, and will also explain some of the most common and effective ways to utilize her twin sister, Abigail.

Preferring to employ studied, elaborate tactics and strategy in combat, Wendy is a unique character whose gameplay often involves fighting large-scale battles into the darkest hours of the night.

One of her more easily overlooked strengths is a lower and slower sanity drain debuff from monsters and the slow drain of dusk and night. Night time can wear her sanity down eventually, but it will take much longer than with other characters. This gives Wendy much more freedom and choice to do as she pleases when the night comes, or when approaching insanity-inducing creatures, such as Spiders or Ghosts.

The first hurdle one will have to face as Wendy is that she simply doesn't have the strength to easily kill the same enemies that some other character could. Her physical strength is equal to Wes's, leaving her more vulnerable to some threats that might have been overlooked with other characters, such as Wilson, or even better, Wolfgang. Kiting is decisively more crucial when playing as her. It becomes increasingly important to get a feel for the timing of your enemies' attacks, as well as to avoid getting overwhelmed - something that is easier to fall victim to without Abigail around to help.

Abigail is Wendy's deceased sister, and main ability, she is called back into ghost form through her Flower. Summoning Abigail lets you trade a hefty 50

for all of the destructive powers of an angry spirit, but always remember: Abigail is not invincible and that she can die. She has a total of 600

and once summoned, Abigail will follow Wendy around, but will keep her distance so that she can't be completely next to Wendy until either Abigail attacks, or until Wendy does the same to her (except in

, whereas Wendy can stand close to her sister to prevent Charlie from attacking). Abigail will harmlessly float near Wendy most of the time, but she will attempt to attack any enemy that Wendy attacks, or any enemy that attacks either Wendy or Abigail herself. It must be noted that she can attack hostile creatures by herself too, such as Spiders, and passive creatures that wander around, such as Moleworms or Butterflies; and this can happen if they get too close to her. Abigail turns red when she is causing damage or when damaged, and while attacking she utilizes a short range area-of-effect (AoE) that can increase in power as darkness fall.

In Don't Starve Together, both Abigail and Wendy have received some important changes.

For example, Abigail deals even more damage during in the daylight and when darkness are falling, respectively dealing 15

, increasing her effectiveness. In addition, she is able to defend herself more effectively thanks to her shield, lasting a brief duration, which can be empowered. Wendy is able to manage her sanity better than ever, and doesn't lose any when you are in proximity of ghosts, becoming neutral to you.

As Wendy you can prepare your Ghostly Elixirs, and administer them to your dead sister to trigger powerful effects. With these, you become able to achieve results in fights that otherwise would have been impossible. She must first gather some Mourning Glories

by helping the spirits of the dead juveniles, the Pipspooks, by finding their lost toys.

The elixirs Wendy can craft are the following:

Learning how best to use Abigail's strengths, and how to manage her weaknesses, is what will set the stronger Wendy players apart from the rest, making a big difference if one knows how to use her powers correctly. Abigail isn't perfect, but she can easily carry you through some of the most common threats in the game, letting you rest easy where you could have struggled alone.

“Abigail! Are you ready to play?”

Abigail is summoned using her Flower. When the flower is fully open

, killing anything (even yourself!) while the flower is on the ground will summon her, causing you to suffer a 50

penalty as a result. However, this does not apply to murdering a captured animal within your inventory (in

, the method is different as described later).

When Abigail attacks, she utilizes a short range area-of-effect (AoE) attack that will deal damage to any enemy in a small radius around her. This damage starts off weak in the daylight, dealing 10

, while gradually becoming stronger as night falls; eventually ramping up to four times (40

during dusk) as much damage during night as she does during day.

Abigail's Flower goes through three distinct stages; the first will show it curled up with a white hue

, the second will show it starting to open with a faded pink color

, and the third will show it fully open and glowing a red-pink

, as well as it levitating when left on the ground, and making a ghostly sound if approached, but this only occurs in

is a high price to pay for summoning Abigail. While usually worth it, unprepared players can find such a sanity drop hard to recover from. Try to obtain some sanity-restoring food (such as a Cooked Green Cap) or clothing (for istance, a Top Hat, since it's easy to come by while playing as Wendy) in order to replace the cost. It is also recommended that the player should not try to summon Abigail when their sanity is already low to begin with, since Abigail can't help Wendy fight the Shadow Creatures.

The easiest way to ensure that you can summon Abigail is to have a nearby Flower and wait for a Butterfly to spawn. Even Wendy, with her tiny fists, can kill these flying carbs in one hit. During Winter, stored Rabbits or Birds can be used instead; though they must first be placed upon the ground before sacrificing them in order to summon her.

In Don't Starve Together, each blooming state of the Flower doesn't determine the charging rate of the item, but rather, it indicates Abigail's power level

, which can cap up to level 3. Each state represents her level, the highest being the one most saturated in red. Each one of it will grow your sister's health from the weak 150 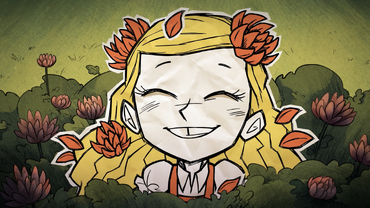 Note that the Flower will stay unbloomed

if you are far from it, left on the ground, or if other players other than you (except other Wendys) carry it in their inventory. Since other players apart from fellow Wendys can't grasp your ghostly and eerie comprehension towards the world of spectral creatures, they can't summon Abigail in any way.

In Don't Starve Together, summoning Abigail has become an easier task, since the player is simply required to right click on the Abigail's Flower and wait for Wendy to summon her. Upon calling for her dead sister, you gain 15

, making the summoning an advantage, all across the board. You should be aware of the fact that Wendy can lose 15

if you dismiss her, making the gain of sanity completely worthless; even more if destroyed by any other means, such as from an enemy or environmental damage, losing 30

and resetting her power

Abigail also has two states, which can be changed by Wendy at will. One, the Sooth state, is what is seen in Don't Starve, where she sticks by Wendy and will never engage if not told to do so (except for a few entities, like Moleworms). In her other state, Rile Up, she targets any hostile or neutral mobs without being told to.

Remember to Sooth her after the combat, as she can cause a lot of unwanted trouble with other creatures (for istance, Bunnymen or Pigs).

When hitting a foe, Abigail renders them vulnerable and the damage they take is increased by 10%, and you are going to deal an extra 40% against them, making Wendy a character more fit for fighting rather than anything. If one does the maths, the total damage dealt to enemies is increased by 115%, rendering Abigail useful to deal important chip damage in (for example) boss fights, whereas she couldn't have done anything but disappear in a matter of seconds. If you are able kite correctly, you can actually set the aggro of the enemies onto you when they try to hit (faling, hopefully), and thus, prolonging her presence in the world of the living.

Another important tip: if you are unsummoning Abigail to prevent the loss of her perks while in combat, you should do it only when you get a little bit of distance from the foe(s), since the unsummoning animation would let the enemy hit Wendy, losing important health points. This also applies to (and especially) when you are summoning her, which takes even more time.

Being the bane of the creatures that swarm their attackers, or those who dare to strike during night, Abigail is able to take down a large amount of monsters which otherwise would be a challenge to defeat on your own.

As she is more vulnerable by herself, one of the most valuable assets Wendy possesses is the ability to throw her sister at creatures in order to kill them for her. Often you can let her take the brunt of enemy attacks for you, while you rush in after the aggro has been triggered to get your own attacks in (or just to collect the loot). Abigail regenerates health gradually over time in the same way that Chester does (which effect can be amplified with

), and and can take quite the beating compared to Wendy, though it isn't hard for Abigail to be bested by certain kinds of enemies.

Abigail will start to attack things when you click to attack them, making a viable strategy to attack-click, quickly move to break the path finding, and then let whatever you just clicked at feel the burn of her ectoplasm. Note that in

you are required to fake an attack on an entity in order to set Abigail on the hunt, and clicking doesn't work at all until the intent of hurting is shown.

Unlike the player (usually), Abigail can be brought back several times in the same world. Don't be afraid to throw her to the Hounds or to use her as a scapegoat in dire situations; your life is far more important than hers.

Some of the situations in which Abigail shines are listed as follows.

There are also many enemies that Abigail will struggle to fight against. These foes are often plentiful on the map and can be extremely dangerous to any Wendy player. Care must be taken when attempting to pass through the areas where these mobs reside when Abigail is in tow.

Here are some notes about Wendy and Abigail. We recommend you to read some of these to expand your knowledge about Wendy's power and how to exploit it.

Above everything else, it's important to know your own limitations and to keep a watchful eye on your items' durability and your health. Abigail will help, but don't let her presence make you feel indestructible. Be prepared and have a plan for any engagement; Abigail can fail you, and you are much weaker by yourself, particularly if you get blindsided or something breaks unexpectedly. Be conscious in combat with Wendy: surprises and being careless are your worst enemies, and can potentially lead to death.

As long as things stay on your terms and you exercise caution, Wendy will carry you well into day 100 and beyond.

Retrieved from "https://dontstarve.fandom.com/wiki/Guides/Character_guides-Wendy?oldid=492888"
Community content is available under CC-BY-SA unless otherwise noted.