“I'm sure he wouldn't mind if I stole a nibble.”

“Wolfgang must eat with eyes closed.”

“NOW SLIDE IT INTO MY MOUTH”

“Whatcha think, Lucy? Should we try a bite?”

“I'm going to have dreams about this pie nightmare.”

“It's really not as scary as it sounds.”

“Lookit that, Warly's at it again.”

“Hyuyu, humans sure are strange.”

“I usually trust Warly's dishes, but this one seems suspect.”

The Grim Galette is a Warly-specific Vegetable Food Item cooked in the Portable Crock Pot that is exclusive to Don't Starve Together. It requires two Nightmare Fuel, a Potato and an Onion to cook. Upon consuming a Grim Galette, the player's current Health and Sanity percentage values are swapped. 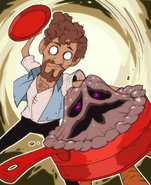 A Grim Gallete as seen in a drawing from Art Stream # 78.
Русский Tiếng Việt
Community content is available under CC-BY-SA unless otherwise noted.
Advertisement