“I bet there's all sorts of good stuff down there!”

“Scary! Is probably full of bones!”

“I should probably leave that alone.”

“Are there treasures beneath the gravestönes?”

“Our loot sense is tingling.”

“Seems rude to mess with it.”

“I cannot help wondering what might be down there.”

“I should probably feel bad about that.”

“Better it than me.”

“I am sorry, dead peoples.”

“The earth has vomited up its secrets.”

“Already got that one.”

“We're sorry about that.”

“Thanks for the loot, dude.”

“What have I become?”

“I had ta check fer treasure!”

Graves or Mounds are naturally-appearing objects in the world that can be found individually in Forests or in a large group in Graveyards (which are characterized by large shrouds of fog). They may be found with or without a nearby Headstone, though graves without headstones can only be found in graveyards. Graves can only be dug up once, and each world has a limited number of them.

"gravestone"
Headstones are objects that usually spawn next to a Grave. They currently have no use (other than marking nearby Graves on the map) and cannot be destroyed.

In the Reign of Giants DLC, if a player has already dug up a Grave, they can bury an item called Webber's Skull inside the grave. Once this is done, light will shine on the mound, Webber will appear and jump into the grave, closing it, and finally a large group of Spiders will appear. Additionally, Webber will be unlocked as a playable character if he has not been already. Doing this will also reset the grave, and it can be then dug up again for the normal loot.

Three Graves and a Headstone as seen in a Graveyard. 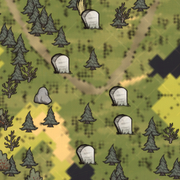 Headstones as seen on the Map.

Multiple Graves as seen in a Set Piece.

Graves found in the last level of Adventure Mode. 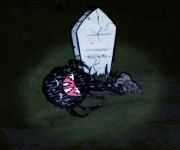 Webber unlocked from a Grave.
Add a photo to this gallery
Retrieved from "https://dontstarve.fandom.com/wiki/Grave?oldid=398846"
Community content is available under CC-BY-SA unless otherwise noted.
FandomShop DC Trivia GalaxyQuest